Why is there So Little Money in U.S. Politics? 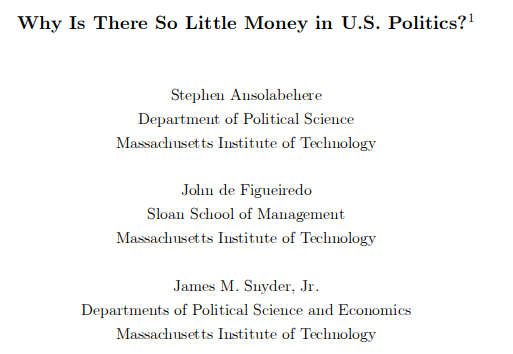 Thirty years ago, Gordon Tullock posed a provocative puzzle: considering the value of public policies at stake and the reputed influence of campaign contributions in policy-making, why is there so little money in U.S. politics? In this paper, the authors argue that campaign contributions are not a form of policy-buying, but are rather a form of political participation and consumption. They summarize the data on campaign spending, and show through their descriptive statistics and their econometric analysis that individuals, not special interests, are the main source of campaign contributions. Moreover, they demonstrate that campaign giving is a normal good, dependent upon income, and campaign contributions as a percent of GDP have not risen appreciably in over 100 years – if anything, they have probably fallen. They then show that only one in four studies from the previous literature support the popular notion that contributions buy legislators’ votes. Finally, they illustrate that when one controls for unobserved constituent and legislator effects, there is little relationship between money and legislator votes. Thus, the question is not why there is so little money politics, but rather why organized interests give at all. They conclude by offering potential answers to this question.

This Is Reform? Predicting the Impact of the New Campaign Financing Regulations

McCain-style campaign finance regulation is the new campaign reality. But what exactly will this reformist utopia look like? Assessing the “reformed” campaign of the future against the stated ...