Did Firms Profit from Soft Money? 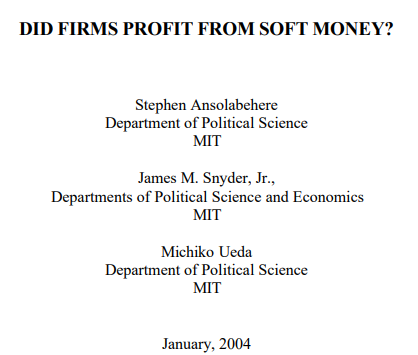 This paper uses event study methodology to measure whether firms that gave soft money to political parties received excessively high rates of returns from their contributions. The authors measure the excess returns of firms that gave large amounts of soft money and firms that gave no soft money, and changes in those excess returns around five key events in the approval of the Bi-Partisan Campaign Reform Act: the House of Representatives passes BCRA, the Senate passes BCRA, the President announces his intention to sign BCRA, the Supreme Court hears oral arguments, and the Court announced its decision to uphold the Act. These actions, especially the Court’s decision, involved considerable uncertainty, and in some cases went against the conventional wisdom. The authors find that the five events surrounding the BCRA had no noticeable effect on the valuation of Fortune 500 firms that gave large amounts of soft money, relative to the firms that gave no soft money.

Why Do Political Action Committees Give Money to Candidates? Campaign Contributions, Policy Choices, and Election Outcomes

Rational political action committees (PACs) will give campaign contributions to candidates for two main reasons. Either the contributions are intended to influence the actions taken ...