Pay to Play: Parties, Interests, and Money in Federal Elections 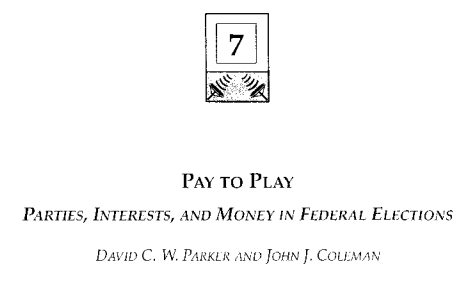 This chapter first appeared in The Medium and the Message:  Television Advertising and American Elections, edited by Kenneth Goldstein and Patricia Strach (Englewood Cliffs, N.J.:  Prentice Hall, 2004), pp. 127-154. In “Pay to Play:  Parties, Interests, and Money in Federal Elections,” Parker and Coleman offer a brief history of campaign finance reform.

Beginning with the Progressive Era, the authors explain the role of money in the relationship between political parties and public interests. From this synopsis, Parker and Coleman extrapolate four impetuses for reform of the campaign finance system:  reaction to perceived instances of corruption, expansion or contraction of the national state, increase in the participation by private interests using independent means to influence the electoral process, and mobilization considerations pertaining to party involvement and strength. By examining these themes, the authors propose that the Bipartisan Campaign Reform Act fails to understand the complex institutional interplay between parties, groups, and candidates, ultimately increasing the prevalence of interest groups, despite the law’s intent to do the opposite. The authors also highlight the fact that campaign finance reforms are often self-interested.

The campaign finance reform ‘campaign’ is controlled and financed by liberal Democrats: wealthy soft money donors to the Democratic party and candidates, liberal foundations and Democratic ...