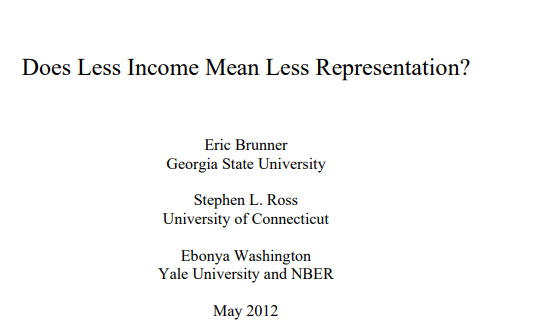 In this study by Eric Brunner of Georgia State University, Stephen L. Ross of the University of Connecticut, and Ebonya Washington of Yale University, the authors assemble a novel dataset of matched legislative and constituent votes and demonstrate that individuals with less income don’t receive less representation, as some academics have argued.

The authors find that the opinions of high and low income voters are highly correlated, and the legislator’s vote often reflects the desire of both socioeconomic classes. What differences in representation by income exist vary by a legislator’s party. For instance, Republicans more often vote the will of their higher income constituents over their lower income constituents while Democratic legislators do the reverse. Lastly, Brunner, Ross, and Washington find that differences in representation by income are largely explained by the correlation between constituent income and party affiliation.

Our system of campaign financing fosters subterfuge and corruption, favors wealthy candidates over those not so blessed, puts candidates on a perpetual fund-raising treadmill, and is ...

The Per Curiam Opinion of Steel: Buckley v. Valeo as Superprecedent? Clues from Wisconsin and Vermont

he rich tapestry of American campaign finance law continued to accumulate threads with the Court’s decisions this term in Randall v. Sorrell4 and Wisconsin Right to ...