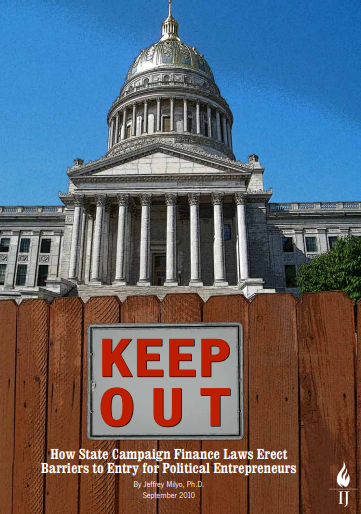 In this report, the author explains how forms of state legislation stifle the political speech of political entrepreneurs, those individuals and organizations who form and grow new political voices and movements. Specifically, the report examines the effects of two types of state campaign finance regulations that act as barriers to independent citizen groups:  contribution limits and political action committee (PAC) requirements. A lack of appreciation for the role of political entrepreneurs in promoting innovative public policy and electoral competition on the part of those in power has resulted in the erection of barriers for outside groups who wish to speak out. The report concludes that instead of encouraging civic engagement, states are attacking independent political advocacy through unnecessary, speech-limiting regulations.

The political and legal battle over campaign finance reform hinges on differing views about the importance of such regulations for preserving and enhancing the integrity ...

Do Campaign Donors Influence Polarization? Evidence from Public Financing in the American States

Does the source of campaign funds influence legislative polarization? We develop competing theoretical expectations regarding the effects of publicly-financed elections on legislative voting behavior. We posit ...