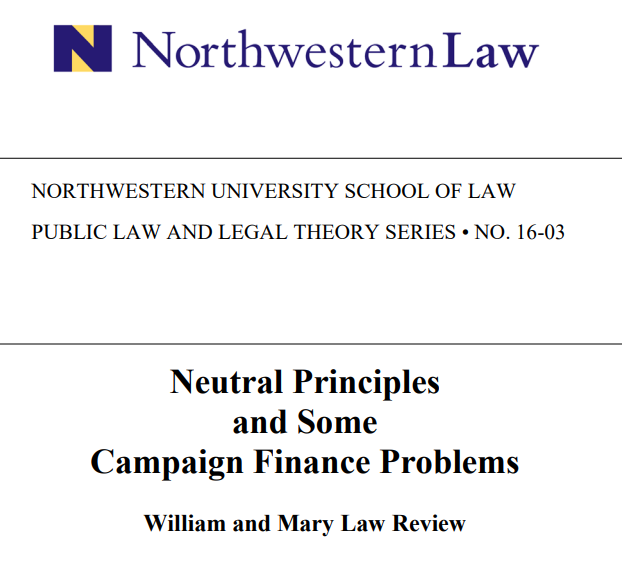 In this William and Mary Law Review article by John O. McGinnis, the author discusses both positive and normative objectives in regards to regulating matters of campaign finance. As a positive matter, the article shows that the Roberts Court’s campaign finance regulation jurisprudence can be best explained as a systematic effort to integrate that case law with the rest of the First Amendment, making the neutral principles refined in other social contexts govern this more politically salient one as well. It demonstrates that the typical Roberts Court majority in campaign finance cases follows precedent, doctrine, and traditional First Amendment theory, while the dissents tend to carve out exceptions at each of these levels.

As a normative matter, the article argues that following neutral principles is particularly important in the application of the First Amendment to campaign finance for three reasons. First, campaign finance disputes bear directly on the political process that determines substantive results across the entire legislative policy space, making the danger of political decision making particularly high. Second, the First Amendment itself reflects a distrust of government officials, and the more a constitutional provision reflects an economy of distrust, the more it requires judicial constraint, which adherence to neutral principles can provide. Third, given that politicians have much to gain from skewing campaign finance regulations in their favor and that judges are appointed by politicians, neutral principles help avoid partisanship and the appearance of partisanship in judicial decision making.

Finally, the Article confronts the most important arguments for departing from standard First Amendment principles in campaign finance and demonstrates that they have far-reaching implications, in that they would allow the legislature to regulate the press or even academics because of their disproportionate influence in politics. But it also shows that, even taken on their own terms, the proposals for judicial reform of First Amendment law in the campaign finance area are deeply flawed. In particular, the idea that the Constitution permits legislators to restrict the freedom of speech for fear it will distort their decision making has no basis in the Constitution. The Constitution provides no baseline for judging distortion, and indeed, its structure permits legislators to take into account the information generated by the First Amendment’s spontaneous order of freedom rather than follow raw popular sentiment.

The Liberal Mythology of an “Activist” Court: Citizens United and Ledbetter

This article presents the first comprehensive analysis of the role of war chests in U.S. Senate elections. Using data on races from 1980 to 2000, ...