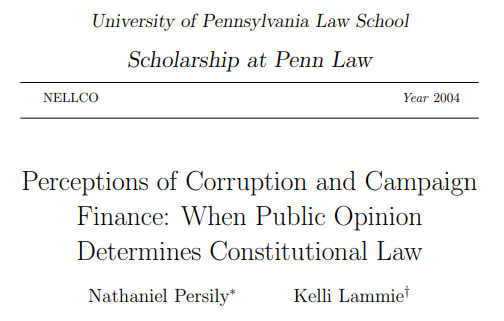 In this article, authors Nathaniel Persily and Kelli Lammie, test the empirical assumptions about American public opinion found in the Supreme Court’s opinions in campaign finance jurisprudence. The area of campaign finance is a unique one in First Amendment law because the Court has allowed the mere perception of a problem (in this case, corruption) to justify the curtailment of recognized First Amendment rights of speech and association. Since Buckley v. Valeo, defendants in campaign finance cases have proffered various types of evidence to support the notion that the public perceives a great deal of corruption to be produced by the campaign finance system. In McConnell v. FEC, in which the Court upheld the McCain-Feingold campaign finance law, both the Department of Justice and the plaintiffs conducted and submitted into evidence public opinion polls measuring the public’s perception of corruption. This article examines the data presented in that case, but also examines forty years of survey data of public attitudes toward corruption in government.

The authors argue that trends in public perception of corruption have little to do with the campaign finance system. The share of the population describing government as corrupt went down even as soft money contributions skyrocketed. Moreover, the survey data suggest that an individual’s perception of corruption derives from that person’s:  (1) position in society (race, income, education level); (2) opinion of the incumbent President and performance of the economy over the previous year; (3) attitudes concerning taxation and big government; and (4) propensity to trust other people, in general. Although the authors conclude that, indeed, a large majority of Americans believe that the campaign finance system contributes to corruption in government, the data does not suggest that campaign finance reform will have an effect on these attitudes.

Judicial Recusal and Expanding Notions of Due Process

In 2009, two uniquely American experiences so grossly offended an individual right that a bitterly divided Supreme Court had to step in. Foreigners scoff at ...

The Liberal Mythology of an “Activist” Court: Citizens United and Ledbetter