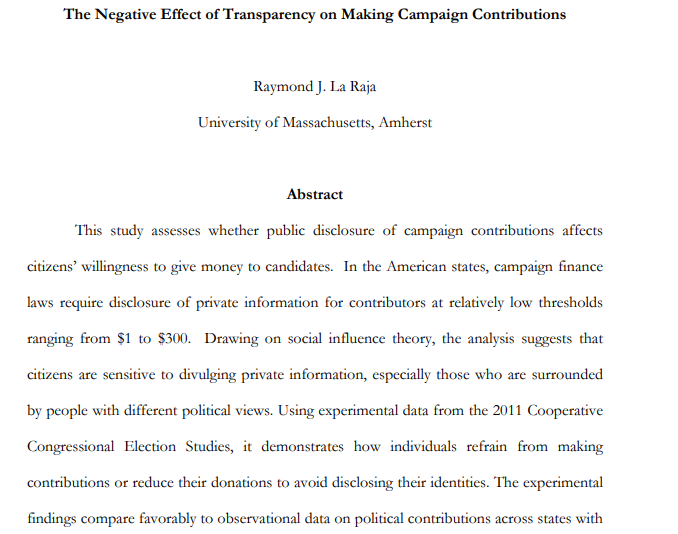 This study by Raymond J. La Raja examines whether public disclosure of campaign contributions affects individuals’ willingness to donate to candidates. Across the country, state campaign finance laws require disclosure of contributors’ private information at relatively low thresholds, ranging from $1 in seven states to $300 in New Jersey. Drawing on social influence theory, La Raja’s analysis suggests that individuals are sensitive to the public release of their private information, especially those who are surrounded by individuals with differing political views. Experimental data from the 2011 Cooperative Congressional Election Studies’ national survey demonstrates how individuals either refrain from contributing or donate at an amount under their state’s disclosure threshold to avoid disclosing their personal identifying information to the general public. Ultimately, La Raja concludes that disclosure laws negatively impact small donors, especially those citizens who perceive themselves as members of groups with differing political viewpoints.

You can read the study here.

By way of introduction, let me note that I am an attorney engaged full-time as a practitioner in political law. I spend my days advising people ...