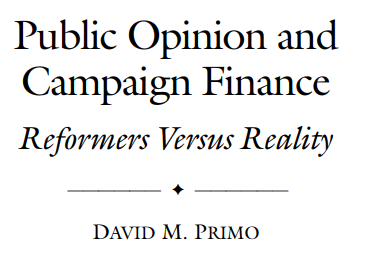 In this article, David Primo reviews the public opinion data and shows that the public has favored campaign finance reform, but it has been inconsistent in its preferences and has assigned it a low priority. He also shows that trust in government is not linked to campaign spending. This absence of connection contradicts arguments that Americans will trust government more if the amount spent on campaigns drops following reform.

Testing Inferences about American Politics: A Review of the “Oligarchy” Result

In a well-publicized study, Gilens and Page argue that economic elites and business interest groups exert strong influence on US government policy while average citizens ...