Publius was Not a PAC: Reconciling Anonymous Political Speech, the First Amendment, and Campaign Finance Disclosure 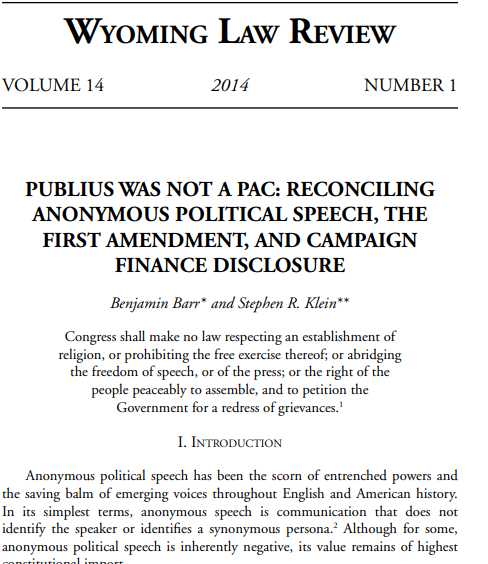 In this Wyoming Law Review article by Benjamin Barr and Stephen R. Klein, the authors emphasize the importance of anonymous political speech. As they explain, modern campaign finance law has eliminated many avenues for anonymous political speech in both federal and state arenas. Under today’s disclosure regimes, citizens who band together and spend as little as $1,000 criticizing or complimenting federal officeholders may be forced to register and report as a political action committee with the Federal Election Commission.

As Barr and Klein note, ironically, one of the most important influences on the ratification of the United States Constitution would face civil and possibly criminal penalties if it failed to register and report as a PAC under current campaign finance regulations. Publius, the collective author of The Federalist Papers, would have to register if they discussed a political issue in numerous states. As disclosure expands under federal law, Publius might also be ensnared in federal regulations.

You can read the full article here.

Modern politicians and activists face a sea of complex and contradictory campaign finance regulations. Every step is governed by limits, prohibitions, reporting requirements -- all run ...