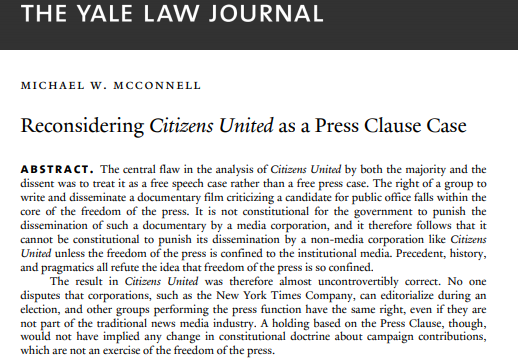 In this article, Stanford Law Professor Michael McConnell argues that the central flaw in the analysis of Citizens United by both the majority and the dissent was to treat it as a free speech case rather than a free press case. According to McConnell, the right of a group to write and disseminate a documentary film criticizing a candidate for public office falls within the core of the freedom of the press. It is not constitutional for the government to punish the dissemination of such a documentary by a media corporation, and it therefore follows that it cannot be constitutional to punish its dissemination by a non-media corporation like Citizens United, unless the freedom of the press is confined to the institutional media. Precedent, history, and pragmatics all refute the idea that freedom of the press is so confined.

The result in Citizens United was therefore almost uncontrovertibly correct. No one disputes that corporations, such as the New York Times Company, can editorialize during an election, and other groups performing the press function have the same right, even if they are not part of the traditional news media industry. A holding based on the Press Clause would have been preferable, McConnell says, because it would not have implied any change in constitutional doctrine about campaign contributions, which are not an exercise of the freedom of the press.

You can read the full article here.

Citizens United v. FEC may prove to be the most important campaign 1 finance decision in decades as a critical step in a transformation of ...

Does “The Freedom of the Press” Include a Right to Anonymity? The Original Meaning

This Article examines relevant evidence to determine whether, as some have argued, the original legal force of the First Amendment’s “freedom of the press” included a ...