Susan B. Anthony List v. Driehaus and the (Bleak) Future of Statutes that Ban False Statements in Political Campaigns 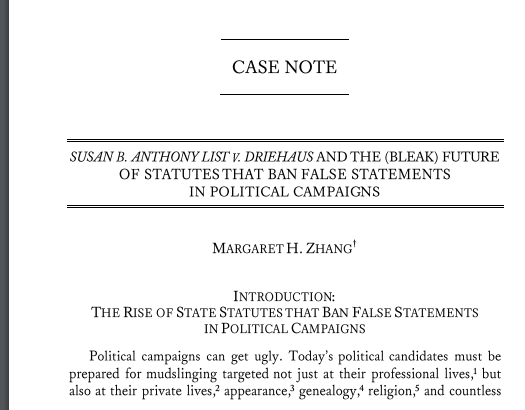 In this University of Pennsylvania Law Review article, author Margaret H. Zhang assesses the constitutionality of state false statement law statutes in the wake of recent court decisions. As Zhang explains, today’s political candidates must be prepared for mudslinging targeted not just at their professional lives, but also at their private lives, appearance, genealogy, religion, and countless other minutiae. As a result, the media has intensified its coverage of negative political advertising in recent years, and this trend has prompted calls for more regulation to deter false statements in political advertising.

Some states have responded. Currently, at least eighteen states have statutes on the books that punish false political statements with civil or criminal penalties. But recent litigation has cast doubt on the statutes’ validity: Washington’s statute was held unconstitutional by an intermediate Washington court in 2005, and Susan B. Anthony List v. Driehaus (handed down by the Supreme Court in 2014) paved the way for invalidation of Minnesota’s and Ohio’s statutes.

With the 2016 presidential election on the horizon, will other states’ statutes fall in the wake of Susan B. Anthony List? Given the Supreme Court’s other recent speech jurisprudence, the author concludes the answer is probably yes.

So What if Corporations Aren’t People?

Corporate participation in public discourse has long been a controversial issue, one that was reignited by the Supreme Court’s decision in Citizens United v. FEC. Much ...

As political campaigns have become more expensive1 and sophisticated,2 Congress has increasingly regulated them,3 yet the Supreme Court has declared many aspects of that regulation unconstitutional.4 Recently, ...