Testing Inferences about American Politics: A Review of the “Oligarchy” Result 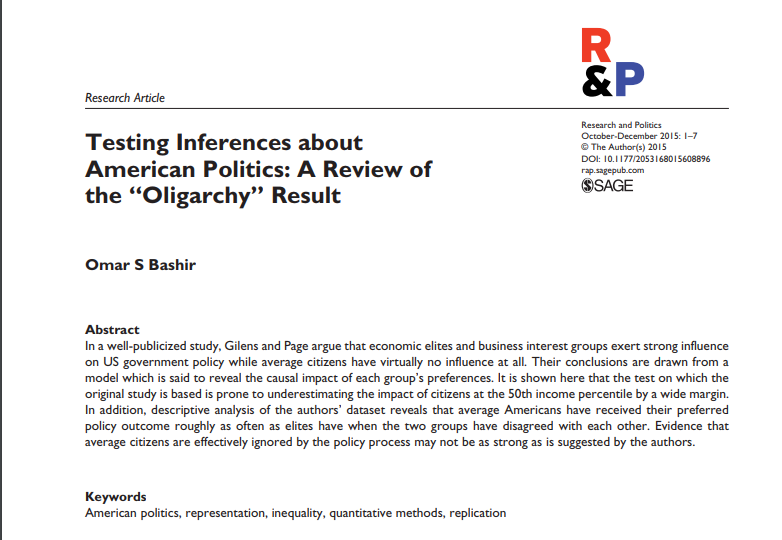 In a well-publicized 2014 study, Martin Gilens and Benjamin Page argue that economic elites and business interest groups exert strong influence on U.S. government policy while average citizens have virtually no influence at all. Their conclusions are drawn from a model which is said to reveal the causal impact of each group’s preferences.

In this article, Omar S. Bashir demonstrates that the test on which the original study is based is prone to underestimating the impact of citizens at the 50th income percentile by a wide margin. In addition, this study shows that descriptive analysis of Gilens and Page’s dataset reveals that average Americans have received their preferred policy outcome roughly as often as elites have when the two groups have disagreed with each other. Ultimately, Bashir shows that evidence that average citizens are effectively ignored by the policy process may not be as strong as is suggested by the authors.

Our system of campaign financing fosters subterfuge and corruption, favors wealthy candidates over those not so blessed, puts candidates on a perpetual fund-raising treadmill, and is ...

Pay to Play: Parties, Interests, and Money in Federal Elections

This chapter first appeared in The Medium and the Message:  Television Advertising and American Elections, edited by Kenneth Goldstein and Patricia Strach (Englewood Cliffs, ...