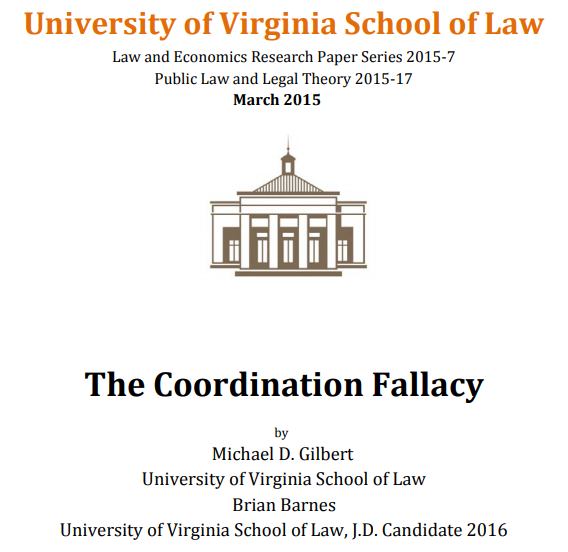 In this symposium article draft by University of Virginia Law Professor Michael D. Gilbert and University of Virginia Law J.D. Candidate Brian Barnes, the authors examine the relationship between coordinated expenditures and corruption. Only one form of corruption, the quid pro quo, is constitutionally significant, and it has three logical elements:  (1) an actor, such as an individual or corporation, conveys value to a politician, (2) the politician conveys value to the actor, and (3) a bargain links the two.

Campaign finance regulations aim to deter quid pro quos by impeding the first or third elements. Limits on contributions, for example, are aimed at fighting corruption by capping the value an actor can convey to a politician. Limits on coordinated expenditures prevent coordination on large expenditures like television ads, but, in turn, transform very useful support into less useful support, reducing the value an actor can convey. But actors can surmount this issue with more spending:  $1 million spent on less useful ads can convey a lot of value, often more than smaller amounts spent on very useful ads or contributions. Limits on coordination may also inhibit bargaining, the third element of a quid pro quo, but again, sophisticated actors can surmount this issue:  they can bargain without discussing the substance of any expenditures.

The Distribution of Campaign Spending Benefits across Groups

Scholarly attention to congressional campaign spending has focused primarily on the benefits candidates receive from that spending, from challenger deterrence to election victory to ...

Free Speech Matters: The Roberts Court and the First Amendment