The DISCLOSE Act, Deliberation, and the First Amendment 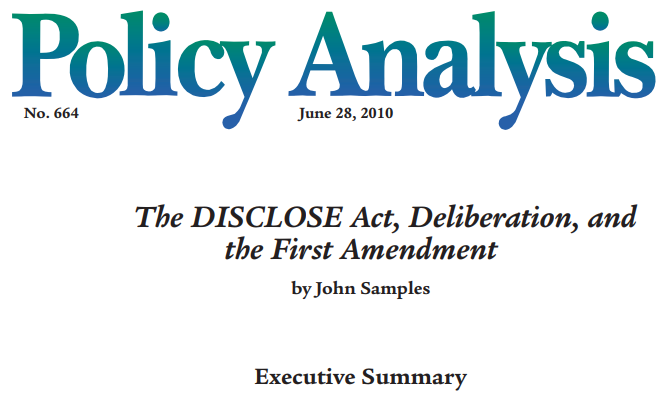 In this policy briefing, John Samples discusses the potential impact of the DISCLOSE Act. The United States Supreme Court decided in Citizens United v. Federal Election Commission that Congress may not prohibit spending on political speech by corporations. President Obama and several members of Congress have sharply criticized Citizens United, and Sen. Charles Schumer and Rep. Chris Van Hollen have proposed the DISCLOSE Act in response to the ruling. DISCLOSE mandates disclosure of corporate sources of independent spending on speech, putatively in the interest of shareholders and voters. However, it is unlikely that either shareholders or voters would be made better off by this legislation. Shareholders could demand and receive such disclosure without government mandates, given the efficiency of capital markets. The benefits of such disclosure for voters are likely less than assumed, while the costs are paid in chilled speech and in less rational public deliberation. DISCLOSE also prohibits speech by government contractors, TARP recipients, and companies managed by foreign nationals. The case for prohibiting speech by each of these groups seems flawed. In general, DISCLOSE exploits loopholes in Citizens United limits on government control of speech to contravene the spirit of that decision and the letter of the First Amendment.

The Failure of Mandated Disclosure