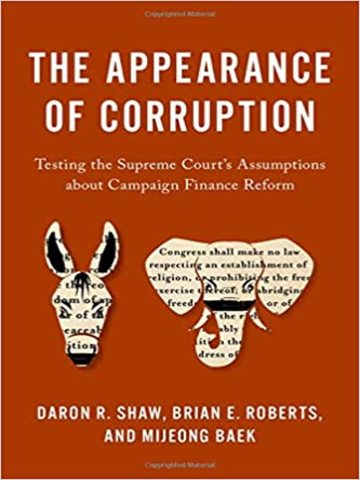 Buckley v. Valeo is one of the most consequential Supreme Court decisions governing the First Amendment’s free speech guarantee. In one fell swoop, it transformed the landscape of campaign finance law. In that decision, the Court recognized that limiting the use of money to promote political viewpoints and support causes fundamentally constrained the First Amendment rights of speakers to express themselves and associate with others. Nonetheless, the Buckley Court also ruled that campaign finance regulations could be constitutionally permissible so long as they are directed towards the compelling government interest of limiting public corruption or its appearance. In the almost half-century since the Court’s 1976 ruling, these rationales have served to justify a sprawling body of laws and regulations curtailing Americans’ First Amendment rights.

In their insightful new book, The Appearance of Corruption: Testing the Supreme Court’s Assumptions about Campaign Finance Reform, political scientists Daron R. Shaw, Brian E. Roberts, and Mijeong Baek examine the assumptions of Buckley v. Valeo and apply cutting-edge research to put them to the test in the modern campaign finance landscape. The researchers characterize three core assumptions underlying the Court’s use of the “appearance of corruption” standard in Buckley to justify federal campaign finance laws:

Published this year by Oxford University Press, this book provides a current and comprehensive analysis of the appearance of corruption in politics. Shaw, Roberts, and Baek systematically analyze Buckley’s assumptions under a 21st century microscope and conclude that they do not hold up to scrutiny. In fact, the opposite of the Court’s assumptions may be true: laws restricting campaigns and political speech may be harmful to political participation due to the fact that “increased spending is associated with greater participation” in political discourse (p. 26). And if Buckley’s assumptions are wrong, then the constitutional foundations of many modern campaign finance laws are built on quicksand.

The authors’ findings may come as a surprise to critics of Citizens United v. FEC, who worried that the newfound ability of businesses and unions to independently spend money on political messaging would destroy or severely destabilize our democracy. While the Supreme Court’s 2010 decision in Citizens United did increase the amount of money spent advocating for and against candidates by freeing independent speakers to make their voices heard, there is no evidence that the public’s perception of government was harmed by this new spending. Indeed, Shaw and his colleagues conducted a cross-sectional analysis of surveys of public perceptions of corruption before and after Citizens United and found that “basic perceptions of government functioning and subsequent political behavior are largely unchanging over the past decade.” This is strong evidence that calls into question the first assumption of Buckley’s appearance standard (p. 27).

Another important assumption among proponents of aggressive regulation of campaign speech is that campaign finance disclosure laws effectively improve voter knowledge about the sources of financial support backing the candidates on their ballots. After all, if such regulations do not change voter knowledge, then they will likely be ineffective in reducing perceptions of corruption. Shaw and his colleagues performed a deep dive into the impact of campaign finance regulations at the state level and note that regulations “are virtually unconnected with substantive knowledge of campaign finance” and that “regulating campaign finance in a state does not improve the level of knowledge voters in that state have about money and politics” (p. 43). Interestingly, one enduring trend in surveys was that voters who had accurate beliefs about the Citizens United decision perceived less corruption in politics (p. 39).

If campaign finance laws are effective at reducing perceptions of corruption, then we would expect places that rigorously regulate in this area to see declines in perceptions of corruption. This is also not the case. In fact, Shaw and his co-authors found that “voters in jurisdictions that regulate campaign finance more aggressively do not necessarily perceive less corruption than do voters in jurisdictions with relatively less regulation” (p. 46). Moreover, their research finds that “increased average spending in federal elections has virtually no impact on perceived corruption” (p. 69).

The authors also point to some interesting findings relating to campaign finance regulation and political trust and participation. Perhaps counterintuitively, the data show no causal link between perceptions of corruption and trust in government (p. 79). These findings reinforce the conclusions reached by political scientist David M. Primo and economist Jeffrey D. Milyo, who recently analyzed the relationship between trust in government and perceptions of corruption in their 2020 book, Campaign Finance and American Democracy: What the Public Really Thinks and Why It Matters. Primo and Milyo, both Academic Advisors to IFS (though their book was written independently of the organization), find that there is “no statistically or substantively significant positive effects of campaign finance reforms on trust in government” (p. 145). Additionally, their book establishes that “higher spending does not appear to coincide with lower trust in government” (p. 81). These findings shatter the compelling interest the government could have in regulating campaign finance to build trust in our political institutions. The American public has relatively low trust in government, but there is no solid evidence that political spending is responsible for this trust deficit.

Shaw and his co-authors also found similar results when analyzing political participation, finding that “perceived corruption has not reduced participation in either the pre- or post-Citizens United world (p. 98). By contrast, campaign spending is linked to building a more engaged electorate. Shaw and his team explain that “average per capita campaign spending is positively and (somewhat) significantly correlated with turnout” (p. 94). This makes sense. Money helps to amplify political messages and reach voters who are otherwise less likely to participate in elections. This messaging can drive increases in voter turnout and lead to greater overall political activity. Thus, not only are campaign finance regulations not associated with increases in political participation, such regulations may actually harm political participation by limiting speech in campaigns.

The Appearance of Corruption is an engaging and impressive book that puts the Supreme Court’s biggest assumptions about campaign finance regulations to the test. These findings reveal that campaign finance laws are propped up on the shakiest of foundations. These laws do not improve voter knowledge, do not reduce perceptions of corruption, do not improve trust in government, and do not improve political participation (while potentially harming it). Moreover, increased spending by campaigns and independent groups is not statistically linked to increased perceptions of corruption in government, declines in trust, or reduced political participation. If courts take the time to seriously consider and apply these conclusions, the implications for the legal future of many campaign finance regulations will be significant.

Concerned with the threat of climate change, editors at The Nation have asked all of the presidential candidates to sign a pledge. The pledge ...