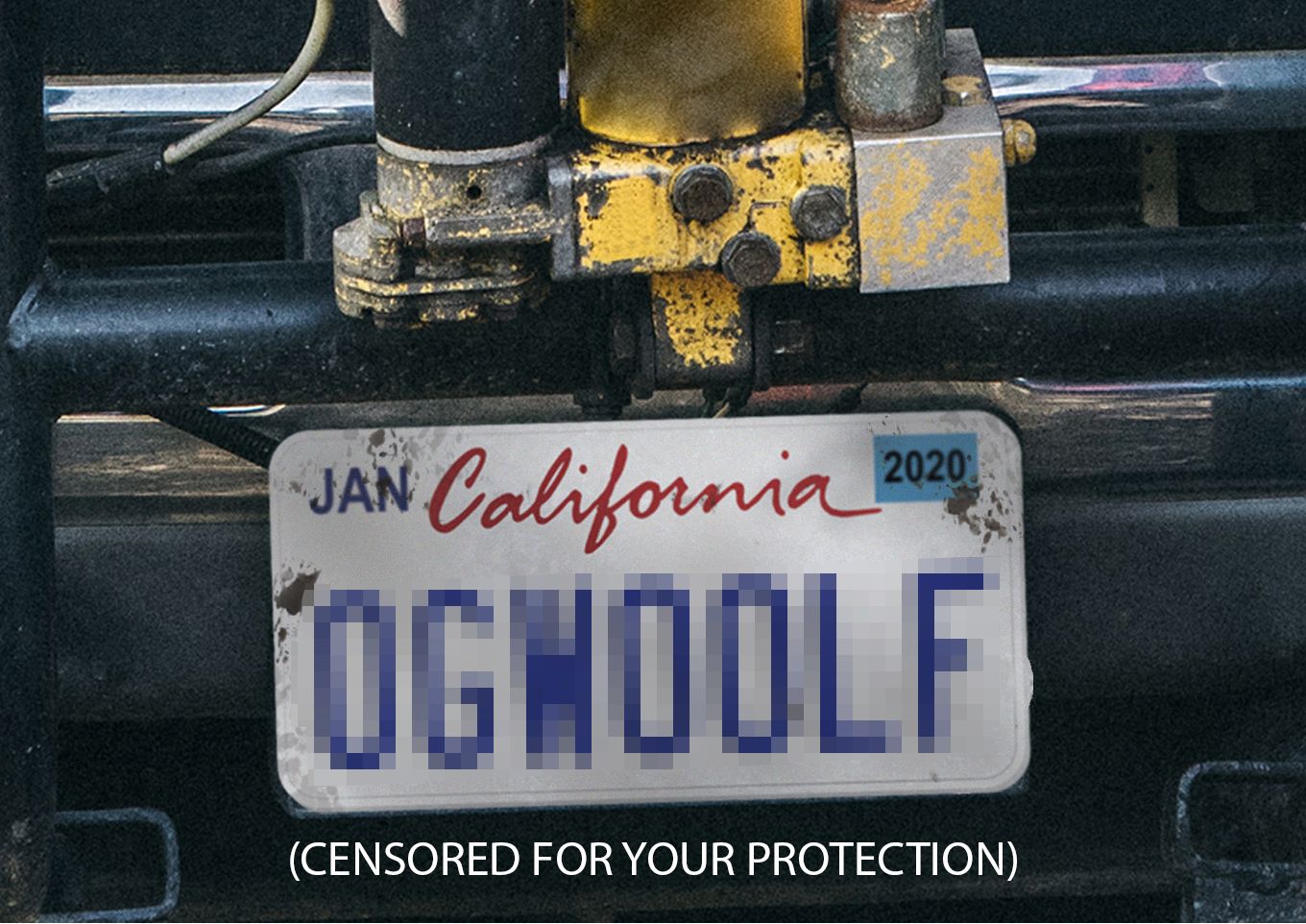 Each year, millions of California drivers buzz through long stretches of California roads. Many of these cars carry personalized license plates, expressing messages near and dear to their hearts. These messages reflect a diverse range of views – from the driver’s values (LBRT4AL), to her business (PHA INC), to their family (BOBS MA).

The Department entrusts four low-level customer service representatives with the responsibility of applying the malleable “good taste and decency” standard. The beleaguered bureaucrats sift through hundreds of applications each week and consult sources like Google Translate, Reddit, and Urban Dictionary to figure out just what might be “offensive.”

In recent years, the DMV has denied a request for a configuration of “BEMYBAE,” a common term of endearment among millennials, because “bae” happens to be Danish for “poop.” It has denied “JEDISCUM,” a term popular among fans of the movie series Star Wars, because it believed the term to have sexual connotations. And it denied an “ICUCAR” configuration on grounds that it was threatening to other drivers.

That is inconsistent with the rule of law. The government must enforce its laws using objective and workable standards; it may not determine who can speak by using an arbitrary standard that allows the Department to deny Californians the right to express themselves based on nothing more than the reviewers’ whim that the speech is “offensive to good taste and decency.”

And a vague law without objective, workable standards for enforcement allows those enforcing it to exercise their authority in biased ways. In 2018, a group of Minnesota voters persuaded the Supreme Court to invalidate a state law banning “political” T-shirts and hats at polling places. (The Institute for Free Speech filed an amicus brief in support of the Pacific Legal Foundation’s challenge.) The law was doomed when the government’s lawyer told the Court that T-shirts featuring the text of the First Amendment would not be “political” and thus allowed, but T-shirts featuring the text of the Second Amendment would be “political” and thus banned. Polling places aren’t the only venue where vague speech restrictions exist. Speech codes that stifle “offensive” or “biased” speech proliferate among college campuses throughout the country. And the nation’s campaign finance regulations are often plagued by similar ambiguity.

Pacific Legal Foundation is representing five Californians to restore the First Amendment rights of all Americans. Our clients include Chris Ogilvie, a veteran who sought to get his nickname (“OG”) embedded in an “OGWOOLF” license plate, which the DMV denied because it thought OG represented “gang affiliation”; a gay musician who was stymied in his efforts to get a “QUEER” license plate in celebration of his identity; and a fan of the rock band Slayer who was denied the opportunity to get a plate celebrating the band’s final performance, because the Department thought the word “slayer” too threatening to other drivers.

These Californians will have their case heard by a federal court on Wednesday. A favorable decision will not just vindicate their right to express their personal messages on personalized license plates, but also will strike a blow for free speech on college campuses, in campaign finance laws, and in a multitude of other arenas.

Imagine showing up to vote on Election Day wearing a t-shirt with your favorite candidate’s slogan. The poll workers say your shirt is illegal ...