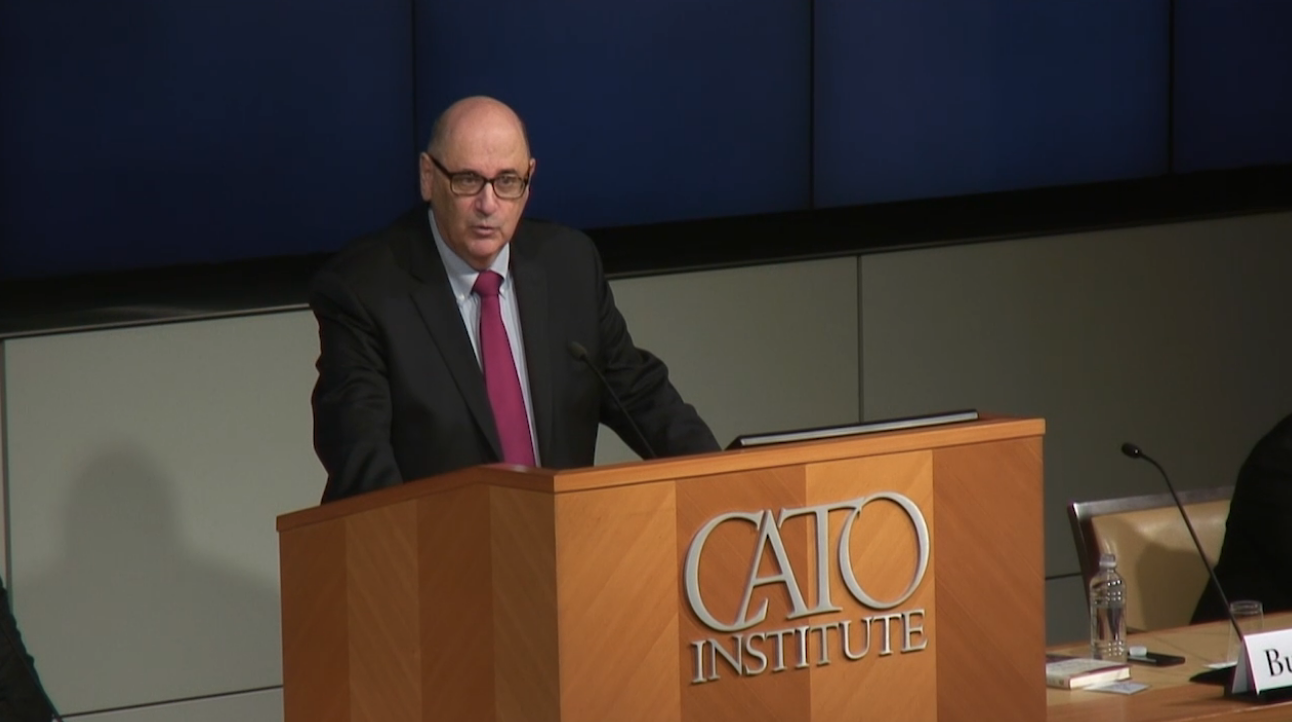 Last week, the Cato Institute hosted a book forum on The Republic of Virtue: How We Tried to Ban Corruption, Failed, and What We Can Do About It by F.H. Buckley. Buckley is a Foundation Professor at George Mason University’s Scalia School of Law. The event featured comments by Michael B. Levy, Policy Director at Brownstein Hyatt Farber Schreck, and was moderated by John Samples, Vice President of Cato.

The speakers touched upon the concept of corruption and its history in American (and British) government. Buckley began by calling the U.S. Constitution an “anti-corruption covenant” and discussed classical notions of virtue and the institutional remedies to corruption. While he believes there are systemic causes for corruption in the U.S., unlike some, he does not blame this issue on “money in politics.” In fact, he proclaimed himself to be quite libertarian on the subject, advocating for sweeping rollbacks of campaign finance laws and blaming American corruption primarily on other factors, like its presidential system (as opposed to the parliamentary system of most other developed countries).

Levy outlined the book’s specific recommendations: (1) securing total anonymity for political donors; (2) banning lobbyist contributions to political candidates; and (3) stopping the “revolving door” that allows public servants to work in lobbying after a career in government. These proposals emphasize lobbying regulation as the way to fight corruption; the first two recommendations would ostensibly prevent any donor or lobbyist from trying to curry favor with a politician by demonstrating their support in order to win preferential treatment.

In reality, this type of straightforward transaction of money for votes does not happen all that frequently – such blatant quid-pro-quo corruption is illegal, and empirical evidence has not found that campaign contributions cause lawmakers to change their votes. Levy was somewhat critical of these proposed restrictions on lobbyists and pointed out constitutional issues with points (2) and (3): campaign contributions are a form of protected speech that cannot be infringed on the basis of one’s profession, nor does the government have unchecked power to regulate the career paths of those who leave the public sector (especially since substantial “cooling-off” periods already exist for such former employees).

But on point (1), Buckley was correct. In his defense of anonymous donations, he pointed out the chilling effect that disclosure and other campaign finance restrictions can have on small donors and advocacy groups. Unlike the rich and powerful, these actors either lack the resources to comply with complex regulations, or face harassment and intimidation for their views when their names, addresses, occupations, and employers are posted online, as is required by federal law. Buckley suggested that the “micromanaging” of political giving and spending can actually create more corruption by creating a net that lets the “big fish” swim past while ensnaring the “small fish.” He lamented that campaign finance laws essentially make it a crime to participate in politics “even with a lawyer at your side.”

Levy was more defensive of campaign finance laws than lobbying restrictions. Responding to Buckley’s discussion on the nature of virtue, he argued that campaign finance regulations were not meant to police individual character, but rather to create “checks and balances” that incentivize good behavior even when people pursue their own ambitions and interests. Such laws are a matter of “statecraft” rather than “soulcraft,” he argued. (Although recent history has shown that campaign finance laws do not incentivize “good” or “bad” behavior – they simply incentivize donors to participate in politics in new ways that weaken traditional political institutions, like parties).

Samples (also an Academic Advisor at the Institute for Free Speech) finished the discussion by musing on the “libertarian response” to problems of corruption and the appearance of corruption. As opposed to the left, which wants democratic institutions to perfectly filter the wishes of the people, or pluralists who think that a competition of organized interests in the public sphere will yield the best outcomes for society, libertarians often argue for sharply reducing the size and relevance of government entirely. In this telling, scaling back the powers of government – in taxation, regulations, subsidies, etc. – will reduce or eliminate the ability for private interests to rent-seek and subsequently the incentives for corruption.

Samples posed two critiques of this viewpoint: (1) how does society achieve that reduction of government in the first place, and (2) would that end state truly eliminate corruption? He argued that even with a smaller government, absent a transformation in human nature, the rational choice in a competitive world is to continue contending for more subsidies and regulations that benefit one interest at the expense of others. He suggested that given these incentives, the ability to freely speak and associate in a liberal society, and the inherent quid-pro-quo of democratic politics (he cited Bernie Sanders promising free university and union pension bailouts to his supporters as publicly “acceptable” forms of corruption) it seems that corruption is an inevitable fact of life. Nevertheless, the panelists agreed that rigorous enforcement of the law can keep corruption at low levels.

This event showcased various viewpoints on how institutions and individual virtue relate to corruption, but one thing that should never be up for discussion is our essential liberties. You can’t end corruption by restricting free speech or the First Amendment. Doing so may just end up exacerbating corruption at the expense of our speech rights.

In politics, it’s easy for narratives to take hold before the facts have a chance to catch up. Political speech issues are no different. ...