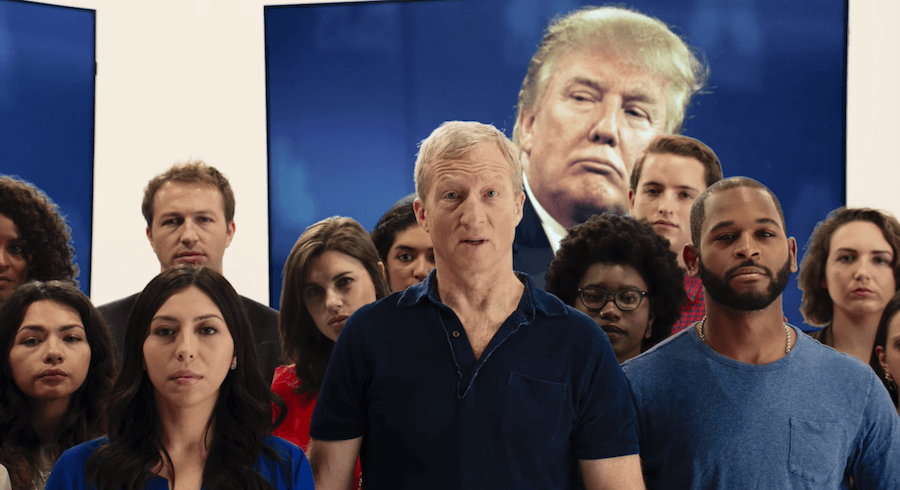 No president in the history of the United States has ever had a 100% approval rating, and likely no president ever will. The Trump administration, which is in no danger of hitting the 100% mark, has received its fair share of criticism. While there are many who approve of what President Trump has done during his first year in office, there are also many others who wholeheartedly do not.

Over the past year, many dissenters have felt compelled to speak out against the President. Some, who have the financial resources to broadcast their message to other voters across the country, have chosen to speak out on their own. Many others have chosen to pool their resources with other like-minded Americans to amplify their voices. Contrary to what some opponents of free political speech would say, neither option is “better” than the other. Rather, this flexibility allows Americans of all walks of life to participate in the national discourse as they see fit.

One voter in particular has quickly become been one of the President’s most vocal antagonists over the past few months: Tom Steyer. In the past, Steyer has been better known for his generous support of the Democratic Party and other progressive causes. However, in the months since Trump took office, Steyer has instead chosen to finance several ads, in which he personally and directly calls for Trump’s impeachment.

Steyer’s ads have gained a lot of attention, but there are a few higher-ups on Capitol Hill who are less-than-pleased with his actions. Evidently, Democratic Party leaders have been pressuring Steyer privately to tone down his rhetoric calling for President Trump’s impeachment, while publicly brushing off the idea as impractical, particularly before Robert Mueller’s investigation is complete. Even so, Steyer has refused to back down, saying that “we’re just telling the truth to the American people, and it’s an important truth.” In so doing, he dealt another blow to the narrative that wealthy donors are the puppeteers for elected officials. Steyer went on to say of D.C. politicians that “if you don’t think it’s politically convenient for you, that’s too bad.”

As an individual citizen, Tom Steyer is perfectly justified in using his resources to promote his opinions and rally other voters. But spending millions on ads doesn’t necessarily translate to policy changes in Congress. In 2014, for example, Steyer was the primary donor to a super PAC he created to promote environmental issues. He contributed nearly $67,000,000 to little effect – because at the end of the day, money only works when voters are equally passionate about the message being promoted. Obviously, Steyer is passionate about impeaching the President. Why should he not be free to spend his money encouraging a national conversation about it?

Implicit in Steyer’s actions is his recognition that one of the most effective ways to amplify his voice and share his message is to spend money promoting it. His campaign has allowed Americans from across the country who feel that they haven’t been heard by their representatives to have a voice. Steyer has invested tens of millions of dollars out of his own pocket in these ads, and they are clearly resonating with Americans. He has collected more than 4 million e-mail addresses from people who signed an impeachment petition. From that list, Steyer has already begun encouraging those voters to call their congressional representatives and press them to support impeachment.

But not every citizen who is passionate about this issue has the same financial resources at their disposal as Tom Steyer. In fact, virtually none of them do. Should they be denied an opportunity to share their views as a result?

Of course not! The inability of Americans of average means to personally finance ads that will be seen across the country should not limit their ability to effectively communicate with other voters. This is why it is so critical that individuals are free to pool their resources with others who share their views to amplify their message. Fortunately, for Americans in this boat, super PACs are a useful tool to do exactly that. Super PACs level the playing field by ensuring that average voters have a platform to speak – just like politicians, media corporations, and the Tom Steyer’s of the world who can finance their own ad campaigns.

The Trump administration has been a source of strong opinions from the Presidents’ first day in office. Millions of people from across the political spectrum have a diverse array of opinions on its performance so far – and that’s a good thing. We do our democracy a disservice by demonizing practices that provide Americans from all walks of life with the opportunity to voice their opinions. We are better off fostering a marketplace of ideas – and the tools needed to sustain this marketplace – where the exchange of a wide range of diverse viewpoints and information allows voters to make better informed decisions.