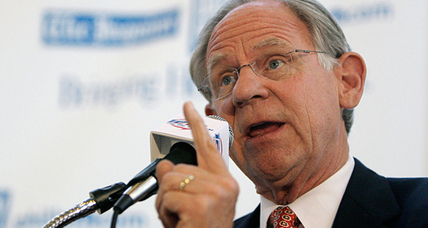 Last week, Issue One – a group that advocates for greater regulation of political speech – published an interview with former Congressman Mike Castle. Castle was a Republican representative from Delaware from 1993 to 2011, and governor of the state from 1985 to 1992. He’s also a member of Issue One’s “ReFormers Caucus,” a group of former lawmakers and government officials who support Issue One’s speech regulating mission. Castle in particular has been a supporter of greater speech regulation, as he was one of just two GOP co-sponsors on the original 2010 “DISCLOSE Act.”

Interviews with current and former lawmakers by self-styled “reformers” tend to serve a singular purpose: to illustrate the purported flaws of the current campaign finance system with firsthand experience – flaws that, in their telling, only government oversight and regulation can solve. The common narrative is that rich donors get undue influence in the policymaking process because they know their contributions can make or break a campaign; lawmakers are consequently forced to spend most of their time trading favors or begging for money, rather than governing or interacting with “real” voters.

That’s the narrative, at least, that Issue One’s interviewer was clearly trying to coax out of Castle. But almost every answer he gave seemed to weaken its persuasive power.

Did Castle feel the need to constantly fundraise to keep his office? “I rarely called anybody about contributing” while running for lieutenant governor once and governor twice. When running for Congress, “I was told to make phone calls, which I did a little bit, but not a lot…”

Did his party pressure him to raise money? “From time to time,” he explained. “I was never a full committee chair or in party leadership, so few fundraising requirements were placed on me.”

Did he feel beholden to donors demanding special access to the policymaking process? “The vast majority of people who contributed to me – and I’m sure to most members of Congress – support you because they support what you believe in and stand for, and they don’t have any requests or demands or whatever.”

Castle notes that some donors (“a percentage,” in his words) think they can talk to or even influence lawmakers to whom they donate. But Castle provides no specific examples of how these donors caused problems throughout his decades-long career in government, suggesting that the sway of donors was not a day-to-day cause of concern for him. Since he’s been out of office for years, it certainly wouldn’t inhibit his political career to shine a light on the inside workings of “the swamp.” It would certainly help Issue One, too.

Alas, evidence of actual backroom deals and illicit influence never appears in the interview. Instead, Castle makes the case for “reform” with allusions and speculation: “I don’t doubt that there are people out there who contribute to parties or contribute to individual candidates who have some interest in influencing where legislation is going to go.”

His take on super PACs is similarly lacking in substance: “It’s hard for me to believe that there’s no coordination with the campaigns. I know there is not supposed to be, but I wonder about that.”

Far from portraying politicians as supplicants to wealthy donors, in fact, Castle almost seems to describe fundraising as a burden for the donors. He explains – in a characteristically speculative fashion – that it’s “probably” easier to write a check to a lawmaker that requests it, rather than turning them down and having to interact with their office later. What’s more, some members of Congress in fact “enjoyed [fundraising] more than others.”

Castle’s telling of his career in politics, then, actually undermines the narrative promoted by Issue One. His own personal experience – being able to stay in Washington for 18 years without trying all that hard to fundraise – refutes the notion that donors wield excessive power over the fates of policymakers and the policymaking process. Indeed, existing campaign finance laws can actually be a cause of what he calls the “tremendous” fundraising advantage for incumbent members of Congress, which has persisted as the regulations have grown.

Despite where the interviewer’s questions tried to lead him, Castle’s answers do not make a stirring case for placing new restrictions on political speech, to say the least. In fact, Castle spends more time describing what the call centers in the Republican headquarters look like than actually articulating specific incidents of undue influence from donors. (For the record, the rooms are “not spacious” or “very luxurious.”)

Readers of this interview who are already inclined to believe the narrative that politics is hopelessly corrupt may nod along in agreement as Castle kind of, sort of, vaguely confirms their suspicions. But the truth is, if this is the best evidence for systemic corruption that a longtime member of Congress and ally of speech regulation has, then Issue One’s name overstates the importance of its cause.

For the 2020 election, the DNC has decided to try out a new requirement for its presidential primary contenders to qualify for the debates. ...