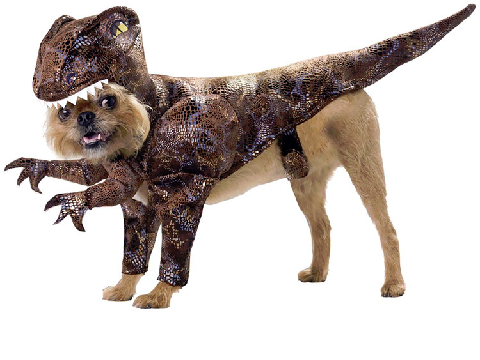 While the debate about what Halloween costumes are appropriate rages on, what isn’t up for debate is the greatness of the growing trend of pet costumes.

According to the National Retail Federation, 18 percent of those celebrating Halloween this year will be dressing their pets up in costumes, up 2 percent from last year. This translates to over 31 million Americans dressing up their furry companion at a cost of nearly a half billion dollars.

This is undoubtedly good news for every American who loves seeing our pets dressed up as hot dogs and pumpkins. (And who doesn’t?) It’s also a sign that the economy is humming along. As NRF President and CEO Matthew Shay said in a press release, “The economy is good and consumer confidence is high, so families are ready to spend on Halloween this year.”

But while the media is reporting this trend as the cute, feel-good story it is, when the media doesn’t like what Americans are spending money on, the headlines are much scarier. Just look at how some press outlets cover political spending around elections.

In the 2015-2016 election cycle, for example, so-called “dark money” totaled $181 million dollars – less than half of a single year’s worth of pet costumes. “Dark money,” of course, is a pejorative term for spending on political speech by nonprofits. Ironically, the biggest such spenders in the 2016 cycle were well-known groups such as the Chamber of Commerce and League of Conservation Voters.

Despite the fact that Americans clearly care more about cute pets than supposedly scary dark money, PBS recently aired a documentary purportedly showing the horrors of “dark money.” Those horrors turned out to be postcards – yes, postcards. Outrageously, people dressing up pets up in cute costumes has not received similar feature time from public broadcasting.

Even looking at the larger trends in overall political spending, the horror stories written about the surge in political spending look silly. The Center for Responsive Politics projects that the midterm election will cost roughly $5.2 billion. Americans meanwhile are spending over $9 billion on Halloween, a one-day holiday where no gifts are exchanged. Hardly the stuff of a Stephen King novel.

This continues Americans’ proud tradition of spending more on holidays than politics.

As the election soon wraps up and discussion of its price tag comes to the fore, remind yourself that in the grand scheme of things, people care more about buying costumes for their pets than funding political messages.

That’s not scary at all.

Neil Gorsuch, and the Supreme Court’s Role on Money in Politics

Democrats in Congress have signaled their intention to make campaign finance a major theme of the Gorsuch hearings this week. No doubt with that ...

No, OpenSecrets, Nonprofits Are Not “Fueling” an Increase in Political Ads

Understanding election spending can be difficult. Complex campaign finance laws and numerous categories of political giving and spending are enough to make your eyes ...