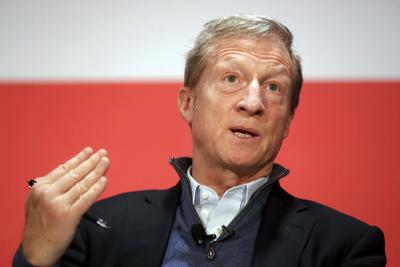 In response to Donald Trump’s victory over Hillary Clinton on Election Day, environmental activist and Democratic donor Tom Steyer has promised to continue to spend his vast wealth to combat the President-elect’s energy agenda, which he predicts will threaten his own environmental protection agenda. According to an interview with Reuters, Steyer is willing to spend “whatever is necessary” in an effort to “engage voters and citizens to fight back.” Steyer has the financial resources necessary to fund effective, wide-reaching communication with the public, and the First Amendment protects Steyer’s ability to spend money to speak about the issues that he cares about.

Independent of how you feel about Steyer’s preferred environmental policies, he deserves recognition for deciding that the way to combat activity he doesn’t like is to speak out and engage the public. What makes Steyer particularly worthy of acknowledgment is the fact that he specifically emphasized that he has no intention of using litigation to challenge Trump. Rather, he pledges to spend money “trying to present an opposite point of view and trying to get that point of view expressed, and communicated to citizens.” This is a perfect example of the appropriate response to speech one disagrees with: more speech.

Of course, the First Amendment protects the right of citizens to challenge the constitutionality of specific policies in court once they become law. But it seems that Steyer does not predict that energy policies pursued by the Trump administration will violate the Constitution. Rather, he simply disagrees that the anticipated Trump administration policies are the best course of action given his concerns about climate change and therefore will attempt to convince the public that Trump’s environmental policies are harmful. In doing so, Steyer is exercising his First Amendment right to free political speech and contributing to open debate. If only everyone had a similar reaction to speech inconsistent with their own views.

Steyer’s response to an opposing viewpoint stands in stark contrast to the response of 17 attorneys general and their political allies to similar speech that they disagree with. To the cheers of some members of Congress, several attorneys general led by New York Attorney General Eric Schneiderman subpoenaed ExxonMobil, along with more than 100 nonprofits, universities, and academics, for the purpose of investigating all internal communications concerning climate science. According to the group of AGs, because Exxon and those subpoenaed questioned certain policies meant to address climate change, they may be guilty of fraud.

The legal proceedings are ongoing, but the message is clear: Under the name “AGs United for Clean Power”, this group of attorneys general will use its power to intimidate and harass any group that participates in speech on the subject of climate change that is not consistent with their own views.

The First Amendment was written to protect citizens from precisely this kind of governmental action. When citizens lose the ability to question the views of those in power without fear of retribution, the First Amendment is rendered meaningless.

Even if you agree with the “AGs United for Clean Power” that climate change is a problem that demands policies to address it or that the speech of Exxon and the subpoenaed nonprofits, universities, and academics is incorrect or misleading, their methods for combatting that speech are still entirely unacceptable. In a nation that strives to uphold the ideals of free speech and toleration, more speech is the only acceptable response to speech you view as incorrect or even abhorrent. The moment you undertake any attempt to silence your opponents, you have not only terminated any opportunity for meaningful debate, but you have trampled upon the very ideals most necessary for preserving a free society.

Tom Steyer, like the 17 AGs, will likely disagree with many of the environmental policies pursued by the Trump administration. With his resources, Steyer could try to manipulate courts and regulators to tie up and combat Trump’s policies. But it is clear (at least for now) that he does not view weaponizing the legal system to silence speech he disagrees with as a proper response to Trump era policies. Instead, Steyer will spend money to speak out against those policies. That’s the right response – if you don’t like what someone is saying or doing, speak up and let people know.

The attorneys general carrying out this investigation and the Senators who are showering these AGs with praise would do well to take a note from Steyer’s book. Write an op-ed, talk to reporters, propose legislation, or give to an organization active on climate policy. Don’t use your power to attempt to silence those with whom you disagree.

Today marks the 233rd anniversary of the signing of the U.S. Constitution. As we commemorate September 17, 1787 as the end of the drafting ...

The Presumption of Free Anonymous Speech

Public Citizen supports anonymous speech – at least when it comes to criticizing businesses. A Tampa Bay divorce attorney is suing Avvo, an online ...