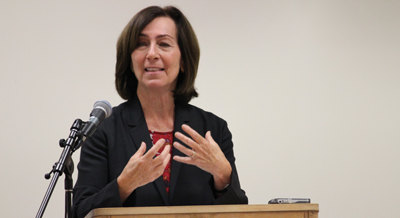 The Federal Election Commission’s Office of Inspector General (OIG) recently released a July 2016 study on the root causes of its infamously low employee morale. After receiving survey responses from 185 out of the Commission’s roughly 338 employees, the Office found that a chief cause of low morale at the agency is the conduct of the Commissioners. Among the findings, 88% of survey respondents said the Commissioners’ tone towards each other impacts how they felt about their jobs, and 83% believe disparaging statements about the agency itself negatively impacts the FEC’s work and mission.

The report is silent on what specific conduct from which Commissioners it is referring to, only saying “some Commissioners have made negative public statements critical of the Agency.” Although the OIG might not want to call out its top leaders, there is a very real and unfortunate partisan element to the FEC’s rancor. Some pro-regulation Commissioners, especially Democratic Obama appointee Ann Ravel, have taken the lead in perpetuating a toxic culture, while using that same culture to argue for increased powers for the Commission.

Supporters of further regulation of political speech have suggested that the FEC’s alleged “dysfunction” justifies placing it under the political auspices of the White House, or supplementing the Commission’s existing campaign finance regulatory authority with similar powers granted to non-expert agencies like the Securities and Exchange Commission, Internal Revenue Service, and the Federal Communications Commission.

Ravel has made no secret about her views on campaign finance regulation, and has embraced any method of showcasing them while openly trashing her three Republican colleagues on the FEC. After less than six months on the job, Ravel wrote a New York Times op-ed condemning her fellow coworkers for creating too much gridlock and frustrating her vision for a more activist regulatory body. In a later piece for The Washington Post, she continued to grandstand about how the FEC should rise above such differences of opinion to more stringently regulate politicians exploring presidential candidacies (despite voting with the FEC’s Republicans to dismiss similar accusations against Hillary Clinton just a month prior). She has also infamously described the FEC as about as useful as “men’s nipples.”

In short, Commissioner Ravel has engaged in a pattern of self-promotion and partisan pettiness at the expense of the FEC’s organizational legitimacy, in spite of the facts about the FEC’s structure. The vast majority of FEC votes do not end in stalemates, but that reality is almost beside the point. Ever since the body was created, it had a purposefully bipartisan design to protect it (as well as candidates and the public) from political abuses of campaign finance laws (see: The Nixon Administration). Rather, the occurrence of some tie votes is a feature – not a flaw – of the system. There is no standard for how many deadlocked votes is “too many,” so Ms. Ravel’s repeated criticisms when her colleagues don’t 100% vote her way is in incredibly bad faith. It is no wonder other FEC employees are demoralized by her stinging commentary.

Regrettably, Ravel isn’t alone either. In 2015, Commissioners Ravel and Ellen Weintraub took the unprecedented step of jointly filing a formal petition with the FEC to implement extensive new disclosure and coordination rules before the 2016 election. (CCP’s formal comments on that petition can be found here.) When Republican Commissioners pointed out that such petitions are intended for ordinary citizens, not federal officials making a point, Weintraub accused them of denying her “personhood.” Recently, Weintraub broke another precedent by hosting an FEC forum that exclusively featured pro-regulation speakers, despite being an appointed member of a bipartisan federal body.

Even after these repeated breaches of protocol, the blame for the FEC’s supposed dysfunction is consistently placed at the feet of the agency’s purportedly obstructionist Republicans. To get a sense of some of the essential actions Republicans are thwarting: in the past few years, Democratic Commissioners voted to punish Fox News for adjusting their qualification criteria for presidential primary debates, investigate Mike Huckabee for a joke he made about wanting to receive million dollar donations, and regulate political speech in videos posted freely on YouTube. Ravel even argued that the Commission should ignore its own exemptions on Internet communications and increase oversight of such speech. This is the activist vision of the Democratic Commissioners – strictly regulating the speech of political opponents and unilaterally pushing the bounds of the FEC’s existing authority.

Despite arguments to the contrary, the number of tie votes at the FEC does not constitute an existential threat to our campaign finance regulatory regime. In fact, as the OIG’s report demonstrates, a primary source of dysfunction comes from Democratic Commissioners trashing their own agency and colleagues. This has not stopped Ms. Ravel from doubling down on her cynicism about the functionality of the FEC. While Commissioners Matthew Petersen and Lee Goodman have decried the open breakdown in civility and defended the fundamental structure of the agency, Ms. Ravel is positively apocalyptic: “The likelihood of the laws being enforced is slim… People think the F.E.C. is dysfunctional. It’s worse than dysfunctional.”

Contrast the attitudes from the two sides, and it is not difficult at all to see where the crisis in the agency’s culture and morale is coming from.

We hear a lot these days about a “dysfunctional” Federal Election Commission, including from the Agency’s own Chair, Ann Ravel, who, after a promising ...