What’s the Value of “Outside Speech” Anyway? 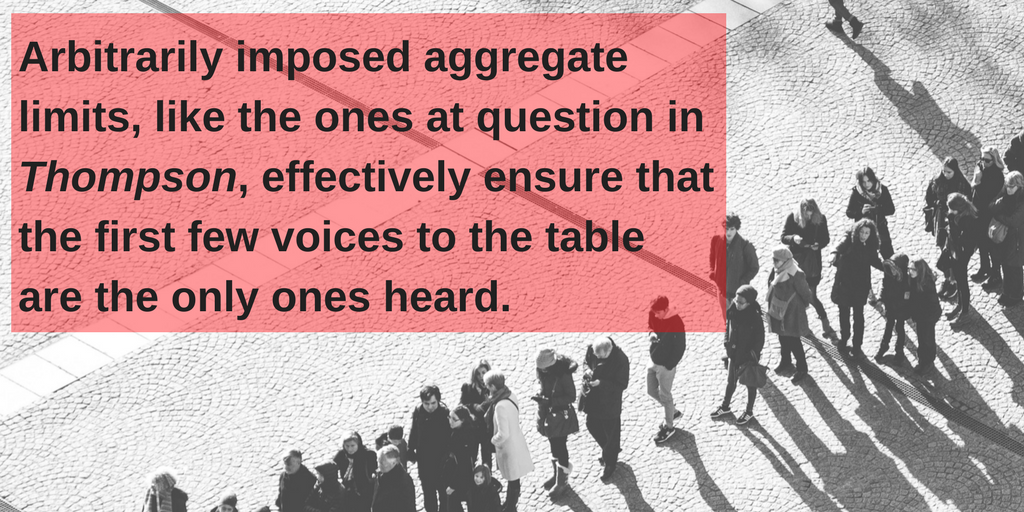 Far outside the boundaries of the continental United States, Alaska’s stringent campaign finance regulations go a step further in distinguishing The Last Frontier from its counterparts. One such regulation that is particularly contentious is an aggregate limit on contributions from non-residents to Alaska candidates, groups, and political parties.

Say there is an individual, Betty, who lives in Arizona and has family in Alaska, but wants to donate to a State House campaign in Alaska because the candidate, Adam, is campaigning on several issues Betty is passionate about. Current law dictates that Betty is only able to donate a maximum of $500 to Adam’s campaign. On its own, this base limit is one of the lowest in the country and significantly restricts the ability of individuals to participate in campaigns. However, Alaska’s contribution limit laws go a step further by imposing yet another layer of regulation. Adam’s campaign is also limited by an aggregate cap of $3,000 on the total amount it can accept from all out-of-state contributors, like Betty. Once this limit has been reached, Adam’s campaign may no longer accept any contributions from out-of-state donors – not even a penny.

Thompson v. Hebdon, a case which will soon be argued before the Ninth Circuit Court of Appeals, is re-opening debate on this issue. David Thompson, the plaintiff in the case, is challenging Alaska’s first-come, first-served out-of-state contribution limit – among other provisions of the state’s campaign finance laws – after he tried to donate $100 to Alaska State Representative Wes Keller, who also happens to be his brother-in-law. The catch is that Keller’s campaign had already reached the maximum aggregate limit of $3,000 for out-of-state contributions that candidates for State House can accept, so Thompson’s donation was rejected. Thompson had not contributed to any other Alaskan candidates, parties, or groups – nor did he intend to – but his one-time donation of $100 to support his brother-in-law was forbidden simply because he donated after too many others already had. As a result, Thompson and his lawyers are arguing that the limits impermissibly restrict freedom of association and should be struck down under the Supreme Court’s 2014 ruling in McCutcheon v. FEC.

Other groups filing briefs in support of the State are arguing that these contribution limits are justifiable and comport with the principle of democratic self-government.

However, for over 40 years, the Supreme Court has held that the only acceptable government interest in limiting First Amendment rights through the restriction of campaign contributions is to prevent quid pro quo corruption or its appearance. Then, just three years ago, the Court ruled in McCutcheon that aggregate limits did not meet the corruption benchmark set for government intervention, and therefore, represented an impermissible restriction on First Amendment freedoms. Yet somehow, Thompson couldn’t give $100 – a contribution falling far below the state’s individual to candidate base limit of $500 – to his brother-in-law’s campaign, because a donor in some other state beat him to it.

Legal arguments aside, if these groups arguing in support of the limit want to curtail “outside speech” in their state elections – if a Wisconsin resident really should be excluded from supporting Alaskan candidates – what would such a state of affairs look like? And what would be the long-term effects? Probably not a whole lot like what most supporters of these restrictions imagine.

There is real value in permitting those outside the state to associate with campaigns: increasing the breadth of information available to voters. These donations – and all campaign contributions – allow campaigns to run more advertisements, send out mailers to residents in their district, pay staff members, and print yard signs and buttons. All of this helps increase the amount of information about candidates available to voters before they cast their vote on election day. 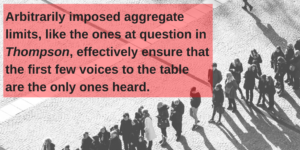 Clearly, Thompson’s interest in donating $100 to his brother-in-law’s campaign wasn’t rooted in a desire to corrupt Alaskan politics or curry favor. He didn’t try or want to contribute to any other candidates. It’s clear Thompson simply wanted to support a family member, but because of the arbitrarily chosen aggregate limit on out-of-state donations, he was banned from doing so.

While a state’s desire to maintain control over who can participate in its campaigns is understandable, the repercussions of chilling out-of-state speech through overly restrictive limits constitute a real, albeit insidious threat. Caps on out-of-state contributions, like the ones at question in Thompson, diminish the quality of civil discourse over time. Alaska’s first-come, first-served aggregate limits on what out-of-state candidates can contribute ensure that only a select few are heard. Quality civil discourse relies on the ability of many different voices to freely express their beliefs and engage in an open and rigorous debate. Contributions – whether from out-of-state donors or residents of the state – increase the information available to voters, allowing them to make an informed decision about which candidate they feel best represents their values and needs.

Further, just because an individual formally resides outside of Alaska’s borders doesn’t mean they can’t (or shouldn’t) have an interest in Alaska politics. Maybe an individual who grew up in Alaska, but was forced to move due to her husband’s job, still has an interest in Alaska’s government. Perhaps a resident of Florida spends several months a year at his vacation home in Alaska while residing the majority of the year in Palm Beach. Or consider an individual whose parents reside in Alaska – even though she no longer does – and who still pays close attention to Alaska politics because the policies adopted by the Legislature and signed into law by the governor directly impact her parents’ livelihood and well-being. It’s short-sighted to think that one’s connections to a given state disappear completely just because they live somewhere else in the country. The individuals in each of these scenarios have clear and rational reasons for caring about Alaskan politics and wanting to donate to Alaska candidates.

At the end of the day, regardless of the contributions made by people who live outside the state, it is still the local, Alaskan voters who will elect their representatives. They should be exposed to as much information as possible to make an informed decision. Out-of-state residents are valuable to the debate because their contributions allow more speech to be heard.

Bloomberg Campaign Shows Why Contribution Limits Should Be Eliminated

The obvious next step in the march towards truly free election campaigns is to remove all contribution limits. If billionaires like Bloomberg can contribute ...