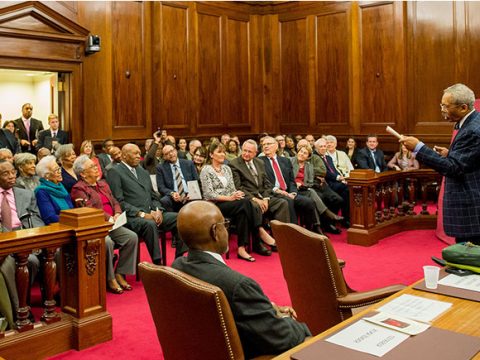 Certiorari for this case was granted by the Supreme Court on January 8, 2021. The Institute filed a second amicus brief in support of the petitioners, Americans for Prosperity Foundation and Thomas More Law Center, here.

The First Amendment protects the right of all Americans to “to pursue their lawful private interests privately and to associate freely with others in so doing.” The Supreme Court has issued ruling after ruling reaffirming that cardinal principle, repeatedly striking down donor disclosure regimes. There is one limited exception: in the context of money given and spent on political campaign advocacy, some donor disclosure has been found constitutional. The Ninth Circuit, however, has messily grafted that narrow exception onto the Attorney General’s dragnet demand for the major donors to all federally-registered nonprofit organizations operating in California. In considering this case, the Supreme Court should return its campaign finance precedents to their proper context and restore the general rule that the compelled disclosure of donors to nonprofit organizations can rarely be squared with the First Amendment.

Read the full amicus brief urging the Supreme Court to hear the case here. Following the Court’s decision on January 8, 2021 to accept the case, read our second amicus brief in support of the petitioners here.

Read an op-ed from IFS Chairman Bradley A. Smith on the importance of the Court’s decision in this case to protecting the First Amendment right to privacy in association here. Another op-ed from FEC Commissioner Allen Dickerson urging the Court to reject California’s donor disclosure demand can be read here.