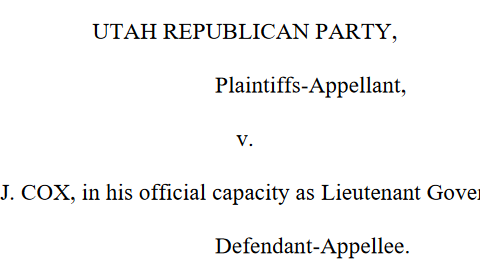 “Effective advocacy of both public and private points of view, particularly controversial ones, is undeniably enhanced by group association.” NAACP v. Alabama, 357 U.S. 449, 460 (1958). The Constitution’s protections for association reach further than the speech (or candidate endorsement) that a majority or plurality of group members would personally make if each could instantaneously cast a secret ballot. Nor is protected association merely a mechanical averaging of the members’ views. It is something altogether different that both results from, and acts upon, the history of the members’ association with each other.

That is why the First Amendment protects not just speech itself, but also the “the right of the people peaceably to assemble,” including the right of expressive associations to live by their own rules when deciding what and how to speak in the public square. The majority opinion was therefore wrong when it held that in assessing whether a regulation imposes a severe burden on a group’s associational rights, courts should “pierce the veil” by disregarding the burdens imposed upon a group’s representatives and internal governance. The opinion would replace the organization’s asserted interests and burdens with the court’s own judiciallyimagined assumptions about what decisions a majority of the group’s members, individually canvassed, might “really” prefer—and, therefore, what sorts of state intrusion this bundle of individuals might perceive as burdening those preferences. Maj. 19–24. Arbitrary judicial re-imagining of a plaintiff group’s asserted interests and constitutional grievances will directly harm the autonomy and expression of groups beyond the political party at issue here. Consequently, this Court should grant rehearing or rehearing en banc.