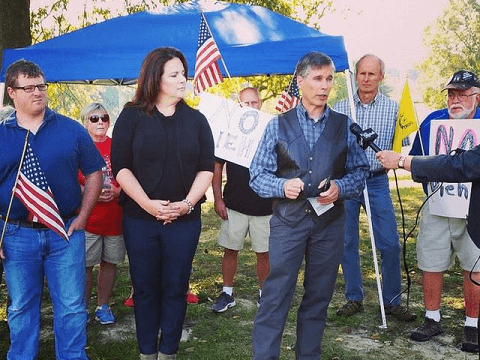 Can a state government fine you simply for talking to state legislators? That is the question at the center of Calzone v. Missouri Ethics Commission.

In August 2016, the Center for Competitive Politics (now the Institute for Free Speech) took the case of Ron Calzone, a citizen activist in the state of Missouri. Some legislators and lobbyists in the state are attempting to silence Mr. Calzone, who has for many years advocated for individual liberty, free markets, and constitutionally limited government. Unfortunately, as Mr. Calzone says, “My activism has made some powerful enemies…Maybe high-paid lobbyists don’t like having to explain to their clients why average citizens, using nothing more than facts, reason and speech, beat them at their own game time and again.” Calzone says he has “angered powerful legislators by opposing them when they were trying to advance unconstitutional bills or ignore constitutional limits on their power.”

Mr. Calzone’s difficulties with state regulators began on Election Day in 2014, when the Society of Government Consultants, a lobbyist guild in Missouri, filed a complaint with the Missouri Ethics Commission. The complaint claimed that, when Mr. Calzone spoke with legislators during his advocacy, he was acting as a paid lobbyist – and that his failure to register as a lobbyist with the state was against the law, subjecting him to fines and possibly even jail time.

The IFS Legal Team has stepped in to defend Mr. Calzone against these charges, representing Calzone in September when his case came before the Missouri Ethics Commission. The Ethics Commission has argued that because Mr. Calzone has publicly mentioned his involvement with Missouri First – a nonprofit organization with no financial resources – he must register as a lobbyist and list Missouri First as the organization for which he is speaking.

Registered lobbyists must pay a registration fee and regularly submit reports detailing all of the ways in which they have attempted to influence legislation. Not only does the registration requirement put an impermissible condition on a citizen’s constitutionally-protected freedom of speech, it also puts speakers at risk of huge fines – and potential criminal penalties – if the required reports are deemed incomplete.

As IFS Legal Director Allen Dickerson notes, The Missouri Ethics Commission’s claim “is thankfully not the law in Missouri, and would be unconstitutional if it were. Neither Missouri First nor any other organization has ever designated Mr. Calzone as a lobbyist, or paid him at all for the communication at issue in this case. We are confident that the courts will vindicate Mr. Calzone’s clear

constitutional right to engage in uncompensated conversation with officials concerning the laws that will govern this state.”

On November 1, 2019, the en banc Eighth Circuit Court of Appeals overruled an earlier panel decision from the Court and ruled in favor of Ron Calzone. Volunteers are not lobbyists.

An Eighth Circuit Court of Appeals panel had ruled, 2-1, that unpaid citizen activists can be forced to comply with the same registration, reporting, and disclosure requirements as professional lobbyists working for large corporations. The full court disagreed, “Now that we have concluded that Calzone’s entire as-applied challenge is before us, the question is straightforward: Can Missouri require Calzone to pay a fee and publicly disclose his political activities, even though he neither spends nor receives any money in connection with his advocacy? We conclude that the answer is no.”

The state may now appeal the decision to the United States Supreme Court, which has not taken a lobbying case since 1954.