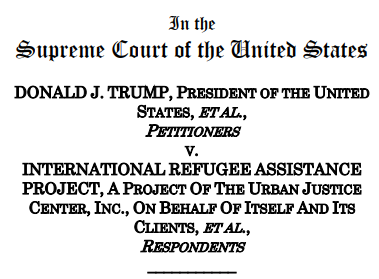 The parties have not focused on the Fourth Circuit’s new assertion that the chilling of certain disfavored speech would be a “welcome restraint.” The “restraint” the majority below would “welcome” is self-censorship.

Within the second Question Presented is the substantive question of whether Section 2(c) of the Executive Order may be subjected to Establishment Clause scrutiny based upon campaign “promises” by candidate Donald Trump, or whether the constitutionality of that order should instead rise or fall based upon evidence less likely to chill political speech and association. Indeed, one member of the Fourth Circuit majority wrote separately, in part, to note her view that the court’s review of the campaign statements was not necessary and that the Order could be found unconstitutional without considering those statements.

Although this case concerns an Establishment Clause dispute, the Fourth Circuit majority quotation above poses important questions concerning free speech, content, and speakers. Yet, rather than maintain the courts’ traditional respect for vigorous campaign speech, the lower court here “welcome[d] restraint” on “campaign promises” of a particular type and by a particular speaker.