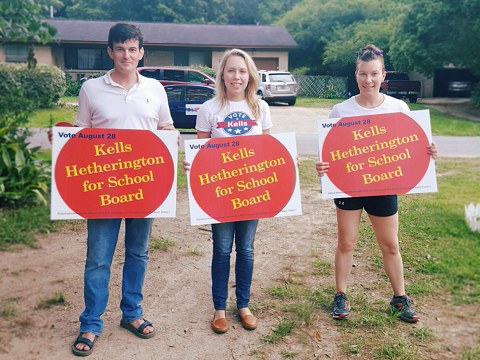 Kells Hetherington is running for the Escambia County School Board to offer his experience in finance to help cut costs and improve performance in the county’s public schools. But he fears being punished for sharing his party membership with potential voters, and for good reason. The last time he ran for school board, the Florida Elections Commission fined him $200 for stating that he is a “lifelong Republican.”

Hetherington, with the help of the Institute for Free Speech, filed a federal lawsuit challenging the Florida law he was punished for violating. Candidates have a First Amendment right to speak to voters about their political views and background. States can establish nonpartisan offices, but they cannot prohibit candidates from mentioning their membership in a political party.

Party membership is one of the most valuable pieces of information about a candidate to the voting public. It gives an immediate impression of the candidate’s outlook and perspective. States should not prohibit candidates from sharing truthful information about their political background.

Hetherington wrote that he was a “lifelong Republican” in his candidate statement on a county website during his 2018 campaign for school board. Acting on a complaint filed against him, the Florida Elections Commission sought to fine Hetherington $500 for stating his partisan affiliation. Although the Commission eventually reduced the fine, it still forced him to pay $200 for saying that he was a member of a political party.

As Hetherington said, “I did nothing wrong when I told voters that I am Republican. The Florida Elections Commission fined me $200 under a law that blatantly infringes on my constitutional right to free speech. It’s an outrage that in the Sunshine State, of all places, we can be punished for telling people what party we belong to. I’m eternally grateful for the assistance of the Institute for Free Speech in fighting this injustice. Perhaps with the court’s help, we can truly have a sunshine state.”

Hetherington and the Institute for Free Speech are asking a federal court to strike down this law as unconstitutional and to ensure Florida officials do not continue to violate candidates’ First Amendment right to express their party membership. Hetherington has registered to run for the Escambia County School Board again in 2022. This time, he wants to be able to inform voters of his party affiliation without the threat of being fined.