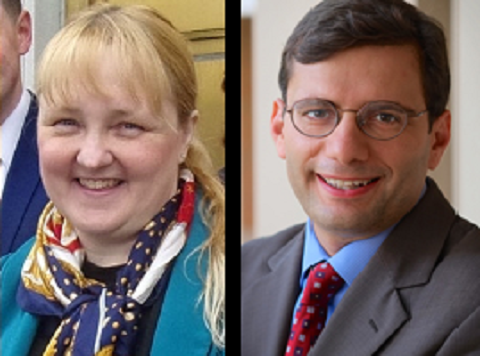 New Jersey law allows candidates in primary elections for Congress to include a slogan of up to six words next to their name on the ballot. The law, however, prohibits slogans from naming or referring to any other person or any incorporated entity in New Jersey, unless the candidate receives their permission. This has fueled a competition in the state to incorporate entities in order to own the rights to their names for ballot slogans and exclude others from using them.

Eugene Mazo is a law professor who is seeking the Democratic nomination to the U.S. House of Representatives in New Jersey’s Tenth Congressional District. Mazo submitted three slogans, but all were rejected by the state because each named an incorporated entity in New Jersey. To avoid having no slogan appear on the ballot, Mazo did what other candidates do: he registered corporations of his own in the state, named after slogans he wished to use.

“I have studied American democracy as a scholar, a voter, and now as a political candidate. And what I can tell you is that New Jersey’s ballot restrictions are unconstitutional. Simply put, they violate the First Amendment. My goal in filing this lawsuit is to create an equal playing field for candidates of diverse political views who believe, as I do, that free speech is sacred. Under our Constitution, New Jersey has no right to regulate what a political candidate can say to his or her voters,” said Mazo.

Lisa McCormick is a small business owner who is seeking the Democratic nomination for the House in New Jersey’s Twelfth Congressional District. State officials denied her choice of slogan – “Not Me. Us.” – because McCormick did not have permission from the incorporated entity organized in New Jersey under that name. A second slogan naming Bernie Sanders was also denied because she did not have Sanders’ permission to use his name. Ultimately, McCormick was able to secure permission to use the slogan, “Democrats United for Progress.”

Candidates have the right to use the rhetoric and language of their choice in their slogans. Yet New Jersey’s law allows anyone to claim ownership of a slogan simply by incorporating an entity under that name. This system is unwise and unconstitutional.

The First Amendment forbids the government from controlling the content of political speech. But New Jersey law allows state officials to censor a candidate’s message to voters.

Candidates for any office may print a six-word slogan alongside their name on New Jersey primary election ballots. Yet the state’s “Slogan Statutes” prohibit any slogan that includes or refers to the name of any person, or any New Jersey incorporated association, without the written consent of that person or association. Consequently, candidates cannot mention the name of anyone, living or dead, or the name of a company on the primary election ballot without permission. Because the Slogan Statutes control the content of a candidate’s ballot slogan, they are an unconstitutional restraint on political speech.

Plaintiffs Eugene Mazo and Lisa McCormick were 2020 candidates for the Democratic Party nomination for the U.S. House of Representatives.

Mr. Mazo ran to represent New Jersey’s Tenth Congressional District, which encompasses Essex, Hudson, and Union counties. He wanted to use a different slogan for the ballot in each county: “Essex County Democratic Committee, Inc.,” “Hudson County Democratic Organization,” and “Regular Democratic Organization of Union County.” State officials, however, told Mr. Mazo that these slogans referred to the names of New Jersey incorporated associations, and unless he was authorized by the chairperson of these organizations, he could not use the slogans. Without the authorizations, his nomination petition would be certified as “NO SLOGAN.” He could not obtain the required authorizations. Instead, he created his own organizations and used three different slogans with the authorizations he gave himself as the chairman of each association.

Ms. McCormick ran to represent New Jersey’s Twelfth Congressional District, which encompasses Union, Mercer, Middlesex, and Somerset counties. She wanted to use the slogan “Not Me. Us.” on the ballot in each county. However, state officials told Ms. McCormick that this slogan referred to the name of a New Jersey incorporated association, and unless she was authorized by the chairperson of this organization, she could not use her desired slogan. Without the authorization, her nomination petition would be certified as “NO SLOGAN.” Subsequently, Ms. McCormick listed “Bernie Sanders Betrayed the NJ Revolution” as her slogan for the primary election ballot, but state officials said that without the consent of Senator Sanders, she could not use that slogan either. Ms. McCormick eventually used the slogan “Democrats United for Progress” when she obtained authorization from that organization.

While neither Mr. Mazo nor Ms. McCormick won their respective elections, both intend to run for the 2022 Democratic nomination for their respective congressional districts and in subsequent congressional primary elections. Accordingly, they filed a lawsuit in the U.S. District Court for the District of New Jersey to secure their rights to use the slogans of their choice on the ballot.

The Government Cannot Control the Content of Political Speech

In Reed v. Town of Gilbert, the Supreme Court held that states cannot “restrict expression because of its message, its ideas, its subject matter, or its content.” Regulations are “content based if a law applies to particular speech because of the topic discussed or the idea or message expressed.” Even laws that are “facially content neutral, will be considered content-based regulations of speech” if they “cannot be justified without reference to the content of the regulated speech.”

Because content-based laws are subject to strict First Amendment scrutiny, the most rigorous standard of review, the Reed Court held they “are presumptively unconstitutional and may be justified only if the government proves that they are narrowly tailored to serve compelling state interests.” Content-based laws face strict scrutiny “regardless of the government’s benign motive, content-neutral justification, or lack of animus toward the ideas contained in the regulated speech.”

The Slogan Statutes restrict candidates’ freedom of expression in a primary election because of the content of their ballot slogans. Thus, they violate the First Amendment.

The Slogan Statutes censor speech on the ballot that is both true and useful to voters. A conservative candidate cannot state that he is a “Ronald Reagan Republican” because President Reagan is deceased and cannot provide authorization for the use of his name. Similarly, liberal candidates cannot invoke the legacies of FDR or JFK.

Other times, candidates may simply be beaten to the punch in registering their preferred slogans. A political newcomer who wishes to brand herself as a champion for “Medicare for All” may discover that others have already seized any potential slogans using that name by registering the name as a New Jersey Corporation that conducts no business. No candidate can exclusively “own” an issue, yet the Slogan Statutes allow them to exclusively “own” pieces of rhetoric on the ballot, to the detriment of their competitors and New Jersey voters.

The Statutes Do Not Promote More Truthful Slogans

In addition to censoring true information, the Slogan Statutes fail to prevent candidates from lying about their associations or endorsements on the ballot. For instance, while a candidate could not name Elizabeth Warren in their ballot slogan without her permission, they could create Elizabeth Warren, Inc., and be authorized to list that association’s name in their slogan. Similarly, because the Slogan Statutes only require the authorization of New Jersey associations, a candidate could falsely claim to be “Endorsed by The New York Times” or another entity formed outside of the state.

The Slogan Statutes create an incentive for individuals to register corporations for the sole purpose of controlling who can use their names in ballot slogans. This benefits political insiders and other long-term players who know they should quickly register a corporation whenever a powerful new idea or piece of rhetoric comes along. Newcomers are left to compete for the scraps, while voters can never be sure if a candidate’s slogan is what they truly wanted to say.

Newcomers are also at a disadvantage because longtime political insiders that run local party affiliates and coalitions can authorize the use of their organizations’ name to their preferred candidates and reject the newcomers, even though the newcomers may share the values of the organization.

What Happens if the Slogan Statutes Are Struck Down?

If the Slogan Statutes are declared unconstitutional, then candidates will be free to reference any person or New Jersey incorporated association without restriction in their ballot slogan. The wasted time and expense of registering corporations to own their names for ballot slogans will come to an end. Perhaps most important of all, voters will finally know that every candidate’s slogan is their choice and can judge accordingly.

Eugene Mazo is a law professor and a nationally recognized scholar. He is the author of several books about election law and campaign finance. A graduate of Columbia College, Professor Mazo holds a master’s degree from Harvard, a doctorate in politics from Oxford, and a law degree from Stanford. In 2020, he ran in the Democratic primary for New Jersey’s Tenth Congressional District.

Lisa McCormick is a mother, small business owner, and publisher of a weekly newspaper and community news website. A lifelong New Jersey resident, she was inspired to run for office to address issues like climate change, inequality, and war. In 2018, Ms. McCormick earned almost 40 percent of the vote in New Jersey’s Democratic primary election for U.S. Senate. In 2020, she ran in the Democratic primary for New Jersey’s Twelfth Congressional District.

About the Institute for Free Speech

The Institute for Free Speech is a nonpartisan, nonprofit 501(c)(3) organization that promotes and defends the First Amendment rights to freely speak, assemble, publish, and petition the government. It was founded in 2005 by Bradley A. Smith, a former Chairman of the Federal Election Commission.