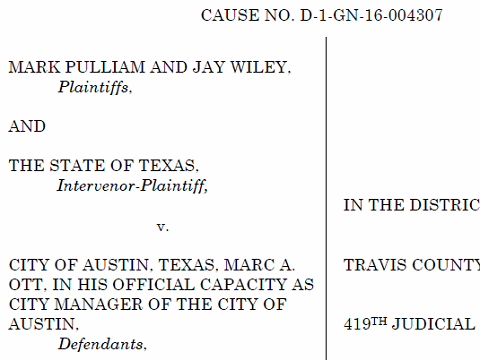 At issue in this case is whether the Texas Citizens Participation Act (“TCPA”) violates a plaintiff’s right under the First Amendment’s Petition Clause to access the courts for “redress of grievances.” Because of the high costs of defending oneself from a lawsuit, parties have found that even frivolous lawsuits can be a potent tool in silencing their critics. Legislatures have passed anti-SLAPP laws to protect defendants where suits are baseless, because using a court’s power to silence a critic in a baseless case would violate the critic’s First Amendment rights to freedom of speech and association. But applying such laws in non-baseless cases – especially when ambiguous language would extend the law’s scope beyond legislative intent, beyond core political speech and association – would violate a critic’s rights under the Petition Clause. Such is the case in Pulliam v. Texas.

The Institute filed an amicus brief urging the court to limit the TCPA under the First Amendment to situations where a suit is both baseless and brought solely to silence critics with the costs of litigation. It also argued that the precision of regulation required in the First Amendment context requires limiting interpretations of the TCPA to suits that directly attack freedom of association. The TCPA should not apply here, where Plaintiffs’ challenge – that giving leave to union officials violates the Texas Constitution’s gift clause – only tangentially touches on defendants’ association rights.