Are PAC Contributions and Lobbying Linked? New Evidence from the 1995 Lobby Disclosure Act 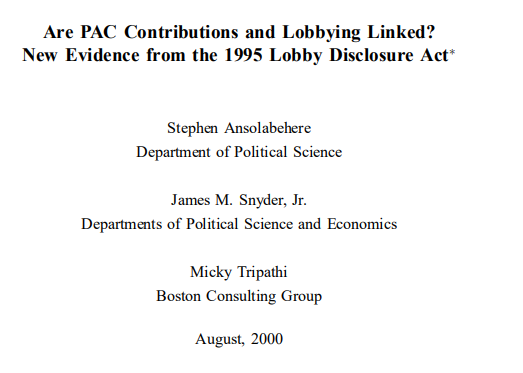 This paper uses data from the 1995 Lobby Disclosure Act to assess the argument that PAC contributions are used to gain access to legislators. First, the authors find a much stronger connection between lobbying and campaign contributions than previous statistical research has revealed–groups that have both a lobbyist and a PAC account for 70 percent of all interest group expenditures and 86 percent of all PAC contributions. Second, they find that groups that engage in relatively large amounts of lobbying–and therefore presumably have a high demand for access–allocate their campaign contributions differently than groups that do not. Groups that emphasize lobbying pay more attention to members’ positions of power inside Congress, and less attention to members’ electoral circumstances, than other groups. Groups that emphasize lobbying also appear to be more bipartisan and less ideological than other groups, giving more equally to both parties and more broadly across the ideological spectrum.

Free Speech and the 527 Prohibition

Proponents of measures to make independent section 527 organizations into “political committees” under the Federal Election Campaign Act, subjecting the organizations to federal campaign limits and ...