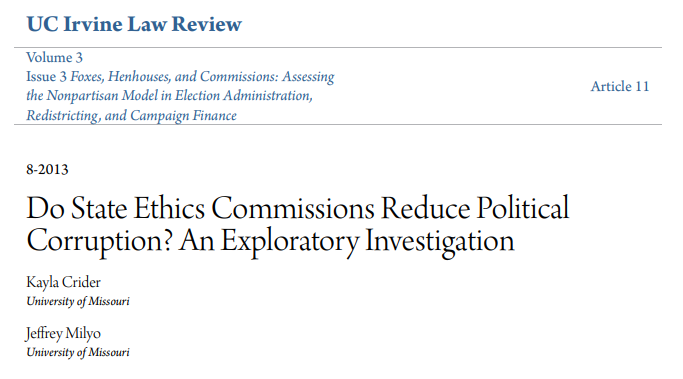 In this UC Irvine Law Review article by Kayla Crider and Jeffrey Milyo, a Professor of Social Science in the Department of Economics at the University of Missouri and Academic Advisor at the Center for Competitive Politics, the authors examine the efficacy of state ethics commissions in reducing public corruption.

As Crider and Milyo note, state ethics commissions, along with so-called freedom of information acts and campaign finance and lobbying regulations, are the quintessential institutional “fixes” for political corruption that have been adopted in the states over the last several decades. Yet, there is surprisingly little evidence that institutions designed to enhance these goals actually work in practice. Instead, anti-corruption policies tend to be based more on the intuition of public administrators or self-appointed watchdogs from the press than from any systematic evaluation.

In fact, despite a robust scholarly literature on the determinants and consequences of political corruption, only recently have social scientists undertaken systematic evaluation studies of state political institutions in order to test the efficacy of common anti-corruption policies. On a positive note (and in support of the intuition of many reform-minded observers), there is some evidence that methods of judicial selection and freedom of information acts really do have a significant impact on corruption rates in the states. On the other hand, there is no support for the often strongly held belief that campaign finance reforms reduce political corruption. However, to date, there has been no systematic evaluation of the effectiveness of state ethics commissions in combating public corruption.

Ultimately, the authors found no strong or consistent support for the common claims made by political actors that state ethics commissions are important policy tools for reducing political corruption. Nor did they find any significant evidence that the partisan composition of these ethics watchdogs matter. Of course, it is not possible to “prove a negative”; the failure to reject the null hypothesis is not the same as proving no effect.

It may be a cliché to observe that campaign finance reform has proved conclusively that the road to perdition is paved with good intentions and that ...

Deadlocked Votes Among Members of the Federal Election Commission: Overview and Potential Considerations for Congress

In the mid-1970s, Congress designed the Federal Election Commission (FEC) to be a bipartisan independent regulatory agency. By congressional design, the agency’s structure is intended ...