Does Cleanliness Lead to Competitiveness? The Failure of Maine’s Experiment with Taxpayer Financing of Campaigns 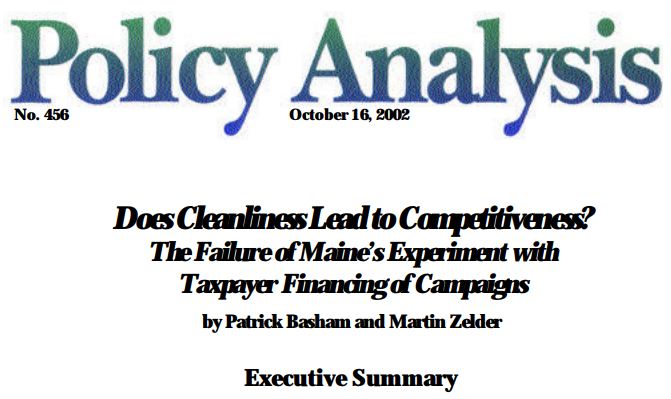 On November 5, 1996, voters passed the Maine Clean Election Act by ballot initiative. That was the first piece of state or federal legislation to offer taxpayer financing to state-level candidates who voluntarily accept spending limits and refuse private contributions. The legislation applied to state senate and house candidates beginning with the 2000 primary and general election campaigns (and will apply to gubernatorial candidates beginning in 2002). November 2000’s voting was the first test of this new campaign finance system, and the Maine Legislature sworn in on December 6, 2000, comprised the first set of elected officials chosen under this system.

In this Cato Institute Policy Analysis, authors Patrick Basham and Martin Zelder examine Maine’s experiment with taxpayer financing of candidate campaigns following the 2000 election. Basham and Zelder find that the adoption of taxpayer financing for the 2000 election did not result in a substantially more competitive election than occurred under private funding in 1998. Although enhanced electoral competition has been predicted as a result of clean election reforms, the evidence from Maine implies the opposite. Comparison of districts that had “clean” candidates in 2000 with those that did not indicates that the clean districts displayed no improvement on two of three measures of electoral competitiveness and actually performed far worse on a third.

Specifically, clean districts exhibited no difference in victory margins or in contestedness – the frequency with which candidates were unopposed – relative to “nonclean” districts. However, in the case of openness – the tendency of incumbents to run – clean districts were far more likely to have incumbents running in 2000 and far more likely to have switched from an open race in 1998 to one in which an incumbent was running in 2000.

Basham and Zelder’s empirical analysis of the 2000 election in Maine supports the following conclusions:

Public Election Funding: An Assessment of What We Would Like to Know

The implementation and expansion of public funding programs around the U.S. over the past decade raised the possibility of major changes in the financing of ...

After being in operation for four election years (2000 – 2006), the Maine Clean Election Act (MCEA) appears to be settling itself into the political ...