Does “The Freedom of the Press” Include a Right to Anonymity? The Original Meaning 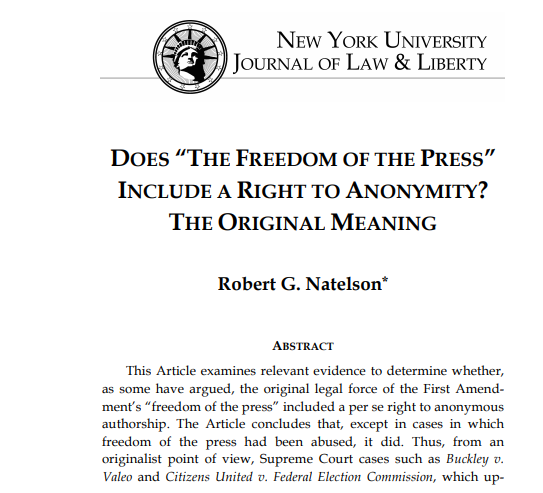 In this New York University Journal of Law and Liberty article, constitutional historian Robert G. Natelson examines relevant evidence to determine whether, as some have argued, the original legal force of the First Amendment’s “freedom of the press” clause included a per se right to anonymous authorship. The Article concludes that, except in cases in which freedom of the press had been abused, it did. Thus, from an originalist point of view, Supreme Court cases such as Buckley v. Valeo and Citizens United v. Federal Election Commission, which upheld statutes requiring disclosure of donors to political advertising, were erroneously decided in that respect.

On January 21, 2010, the Supreme Court handed down its opinion in Citizens United v. FEC. Since then, congressional critics of the Court's broad holding ...

Shade from the Glare: The Case for Semi-Disclosure

Disclosure, normally the most widely embraced element of election regulation, became highly controversial in 2010. On the eve of the mid-term elections, a Washington Post ...