Eternal Inconsistency: The Stunning Variability in, and Expedient Motives Behind the Tax Regulation of Nonprofit Advocacy Groups 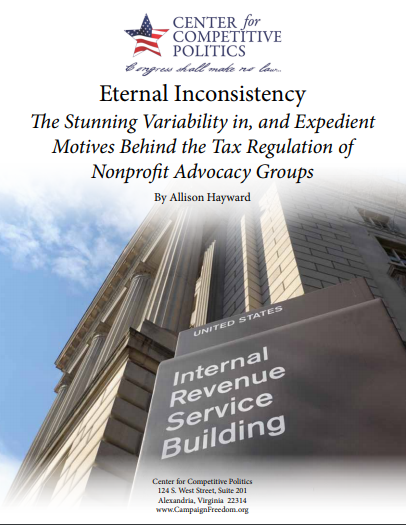 In this study, California election law attorney Allison Hayward analyzes the historical roots of the IRS’s recent scandals, and discusses how:

Ultimately, Hayward concludes her paper by urging readers to “draw several lessons from this history.” First, the Internal Revenue Service, while effective at raising revenue, is a poor agency to task with regulating advocacy organizations, especially those that cannot offer donors a tax deduction. Only trivial amounts of revenue are at stake. Whether a certain message, or viewpoint, or advertisement, or tone is proper should not be a concern of the tax man. Second, Congress must resist the temptation to even political scores through tax legislation. Not only is it poor governance, but it rarely works. Finally, the courts should remain vigilant in protecting groups from Service overreach and congressional mischief. While it remains a canard of legal analysis that nobody has a right to avoid paying taxes, in this context – again – revenue is not the issue. Courts should feel free to identify and excise laws, even tax laws, which abridge political freedoms.

Overwhelmingly Opposed: An Analysis of Public and 955 Organization, Expert, and Public Official Comments on the IRS’s 501(c)(4) Rulemaking