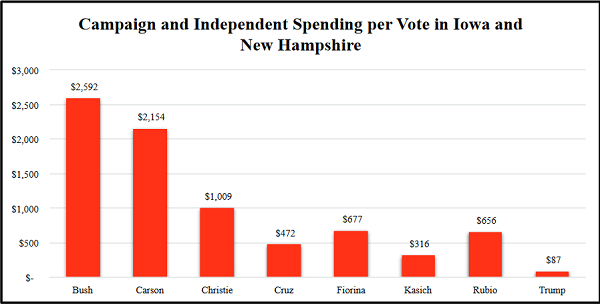 As this Issue Brief discusses, results from the 2016 Iowa Caucus and New Hampshire Primary highlight that the age-old adage that “money buys elections” is a myth. An analysis by the Institute for Free Speech reveals that total spending to date by candidates and super PACs supporting the 2016 Republican hopefuls was, in fact, negatively correlated with votes received in Iowa and New Hampshire. 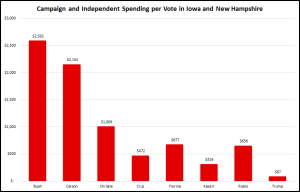 Jeb Bush’s campaign provides the clearest example that money alone cannot persuade voters to support a candidate. Despite leading his opponents in combined spending by his campaign and the super PAC supporting his candidacy, Bush finished 6th in Iowa and 4th in New Hampshire. The Bush campaign and pro-Bush super PAC ultimately spent $2,592 per vote received, more than any other candidate in the Republican race.

Money spent didn’t translate to votes received for the rest 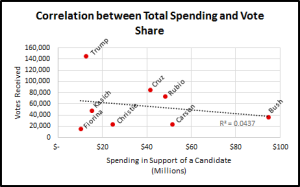 of the GOP field either. For all candidates combined, spending was negatively correlated with votes. Taken together, the Marco Rubio campaign and independent super PACs supporting his candidacy spent just over $48 million, more than every Republican candidate except Bush and Ben Carson, but Rubio finished 3rd in Iowa and 5th in New Hampshire. Donald Trump, who spent the least of any candidate still actively campaigning, finished 2nd in Iowa and 1st in New Hampshire.

Broadcast, cable, and radio ad spending data compiled by Morning Consult tells a similar story. Dollars-per-vote ranged wildly from a high of $1,200 spent per Bush vote compared to a low of just $18 per Cruz vote. The benefit of ad data is that it is specific to Iowa and New Hampshire; the drawback is that it fails to capture other important forms of spending on staff, mailers, travel, and other campaign expenses. But whether one looks at ad spending or total spending, the takeaway is the same: money is not buying votes.

One important form of spending that is not reflected in either set of data is free or “earned” media coverage. Donald Trump, in particular, has benefited from free media coverage (and his celebrity status), which has proven to be more valuable than campaign and super PAC spending. A candidate doesn’t need as many ads or mailers to build name recognition and communicate their views to voters when the media is providing that benefit for free. Super PACs – which allow individuals, corporations, and labor unions to pool their resources independently of candidate campaigns to promote their preferred candidates – are an important counterweight to the ability of wealthy individuals to purchase media corporations that can publish and promote their political views without limit.

To be sure, some spending included in our analysis has gone towards states that have not yet held a caucus or primary. However, virtually every candidate places a heavy emphasis on at least one of Iowa and New Hampshire, the first two states on the primary calendar.

As the results from Iowa and New Hampshire illustrate, winning the campaign spending battle does not guarantee a win at the ballot box. In 2014, it was then-House Majority Leader Eric Cantor losing to upstart candidate Dave Brat in a Congressional primary race despite outspending Brat 26-to-1. In the past, wealthy and well-funded individuals such as Steve Forbes, Jon Corzine, Linda McMahon, and Sean Eldridge have similarly learned that money doesn’t buy votes.

Campaign spending pales in comparison to the importance of other elements in determining a candidate’s success. Myriad factors – including a candidate’s policy views and proposals, messaging, get out the vote effort, campaign infrastructure, experience, character, and personality – affect their electoral performance.

Ultimately, campaign and independent spending play an important role in amplifying a candidate’s message and informing and motivating voters, but as the results from Iowa and New Hampshire indicate, they don’t determine outcomes. Efforts to limit campaign spending should be seen for what they are: efforts to limit speech.

A common refrain from proponents of greater speech regulation is that Americans spend “too much money on politics.” In the 2016 election cycle, “too ...