Issue Analysis No. 11: Do Out-of-State Donations Lead to Electoral Success? 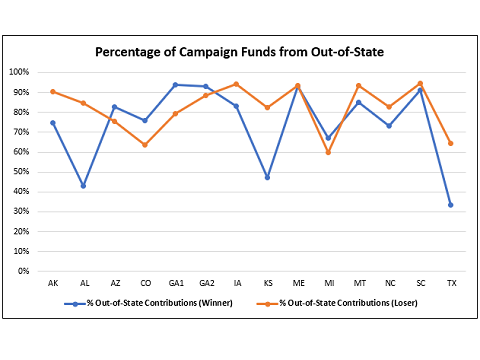 Proponents of further restrictions on political spending often argue that money effectively buys elections. To ensure a fairer election process, they maintain it is necessary to limit the inflows of campaign cash so better resourced candidates can’t claim an unfair advantage. Increasingly, political cash does not stop at the state border, and in 2020, donors contributed significantly to federal races outside their home state, sometimes to the opposing candidates’ chagrin. Georgia Republican David Perdue, who lost to Democrat Jon Ossoff in a 2020 runoff election for a U.S. Senate seat, was not fond of the out-of-state contributions received by his opponent, saying “we don’t want people from outside of state trying to come down here and dictate what we’re going to do.”[1] This sentiment, of course, is driven by the belief that money spent on an election unilaterally determines votes received, but further, that this axiom must be the case irrespective of donor geography.

But do out-of-state contributions actually lead to electoral success? This analysis examines that assumption. The results suggest that concern about out-of-state dollars deciding election outcomes is unfounded. This study looks at competitive U.S. Senate races in the 2020 election cycle and finds that most of the candidates who received a greater percentage of their campaign contributions from out-of-state donors than their opponent lost the election.

We began by isolating the most highly contested U.S. Senate general election contests from 2020. This avoided the inclusion of highly uncompetitive races where campaign finance matters had little impact on the outcome. Using The Cook Political Report’s Race Ratings issued closest to the election, we disregarded any race ranked “Solid Democrat,” “Likely Democrat,” “Likely Republican,” or “Solid Republican.”[2] None of the races rated “likely” or “solid” produced any upsets.

Of the seven races rated as a “Toss Up,” the candidate who raised a larger percentage from out-of-state donors lost five contests, with only the two Georgia Senate races bucking the trend. These losses included four of the five candidates who had the largest disparity between in-state and out-of-state support. Sen. Lindsey Graham’s Democratic challenger, Jaime Harrison, boasted the greatest disparity, with 94.5% out-of-state support. Just behind was Theresa Greenfield from Iowa, who received 94.4% of her contributions from out-of-state. Sara Gideon from Maine and Steve Bullock from Montana received 93.6% and 93.5% of their support from out-of-state, respectively.

Even so, out-of-state donors can help make more races competitive by allowing challengers to compete with incumbents who have well-established in-state and other fundraising networks. They can also help keep the lights on so fewer candidates have to drop out of the race prematurely.[5]

This study suggests that out-of-state dollars are not as indicative of potential election outcomes as in-state dollars may be. After all, only an in-state donor can signal their intent to vote for a particular candidate by assisting that candidate’s campaign through a monetary contribution. Evidence from the 2020 cycle suggests that it is not money that draws votes after all. More plausibly, it is likable candidates and the prospect of success that attracts campaign contributions and votes. If a candidate raises relatively more money from out-of-state donors compared to their opponent, competitive 2020 Senate races show that the vote count will generally favor the opponent.

Efforts to limit out-of-state donations would likely have little influence on electoral outcomes directly, but such proposals would restrict a valuable source of campaign assistance for political firstcomers who lack the advantages of incumbency. While out-of-state dollars are an asset to a campaign, ultimately, they are not representative of the Americans who can vote for their preferred candidate on Election Day.

[3] See “Institute for Free Speech Issue Analysis No. 11: 2020 Electoral Success by Donor Geography.” Data from the Center for Responsive Politics. Retrieved on July 21, 2021. Available at: https://drive.google.com/file/d/1hx6q7yyNSZ3ipRfjkxRCoDxTGDhbyAyO/view (2021).

[4] The data for in-state vs. out-of-state donations rely on the Center for Responsive Politics’ methodology. It is unclear if the Center’s data set includes all donations or only itemized donations.