A Comparison of Independent Expenditures and Voter Turnout 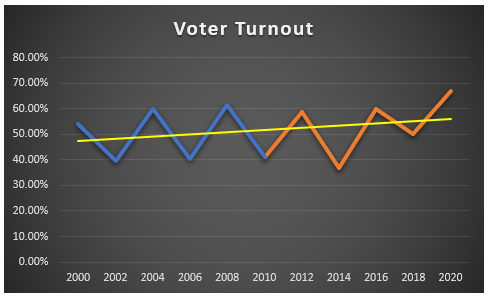 When the Supreme Court decided Citizens United v. FEC in 2010, many critics argued it would have a devastating impact on democracy. For example, in his dissent in that case, then-Justice John Paul Stevens opined that, “[i]n the real world, we have seen, corporate domination of the airwaves prior to an election may decrease the average listener’s exposure to relevant viewpoints, and it may diminish citizens’ willingness and capacity to participate in the democratic process.”[1] This analysis investigates the claim echoed by Justice Stevens about the effect of the independent spending set free by Citizens United undermining political participation in the democratic process.

To evaluate this claim, we examined the impact Citizens United had on voter turnout. Turnout data is one important indicator of a healthy democracy because it reflects both the willingness and capacity of citizens to engage in the political process. If critics of Citizens United were correct about the destructive effects the decision would have on engagement in the democratic process, then one of the factors most likely to be impacted would be political participation, as measured by voter turnout.

In terms of real-world effects, Citizens United’s largest impact can be seen through an increase in independent expenditures urging the election or defeat of federal candidates. If the decision was harmful to participation in the democratic process, as Justice Stevens asserted in his dissent, one would expect voting turnout rates to decline as independent expenditures increase. This analysis compares that relationship. 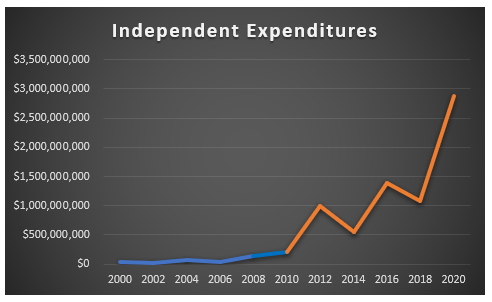 As expected, this graph shows a sharp increase in independent expenditures over time after Citizens United (and subsequent decisions relying on Citizens United) eliminated prohibitions on this type of electoral spending from corporate, union, and most nonprofit speakers.

The second graph charts voter turnout data over the same 20-year period with 10 years of data plotted before and after Citizens United. The 2000-2018 data is drawn from the United States Elections Project and represents the percentage of the voting-eligible population who voted in each year’s election.[3] The 2020 election turnout data is from the United States Census Bureau.[4]

This graph demonstrates that, despite turnout varying according to whether it is a presidential election year, turnout has been rising. The yellow trendline shows a small but steady increase over the last 20 years. In fact, 2020 had the highest turnout rate of all the years surveyed with 67% of the voting population casting a ballot, and 2020 had “the largest increase in voters between two presidential elections on record.”[5]

These findings are consistently supported by academic literature. The political scientist João Cancela and economist Benny Geys conducted a meta-analysis of 185 studies on political spending and voter turnout and found that campaign spending is positively linked to increases in voter turnout.[6] This linkage makes intuitive sense: spending enables political messages that inform voters, and informed voters are more likely to vote. As political scientists John Coleman and Paul Manna affirmed in their research, “[c]ampaign spending increases knowledge of and affect toward the candidates, improves the public’s ability to place candidates on ideology and issue scales, and encourages certainty about those placements.”[7] Additionally, political scientists Thomas Palfrey and Keith Poole have found that more highly informed voters “are much more likely to vote.”[8] Thus, campaign spending has been shown to not only inform voters but also drive them to the polls.

Political spending is particularly important in local elections that receive less media attention than national and statewide elections. Political scientists Thomas Holbrook and Aaron Weinschenk surveyed the impact of campaign spending on voter turnout in local elections. They studied 340 local elections over a 15-year period and found that campaign spending, particularly by less well-known political challengers, “has a statistically significant and pronounced effect on turnout levels” and that “turnout is higher in cities where candidates spend more money.”[9] Thus, increasing spending has been linked consistently to increases in voter turnout for over 20 years from 2000 to 2020 and across numerous studies of federal, statewide, and local elections.

These findings provide no evidence for predictions that Citizens United would cause diminished voter turnout. Despite the dire warnings from Justice Stevens and others, Citizens United has not been linked to undermining either the willingness or capacity of citizens to participate in our democracy by voting. If anything, the fact that both independent expenditures and turnout rose after Citizens United indicates that the decision likely improved political participation.[10] Legislators who value high voter turnout should be especially wary of passing laws that could limit the amount of spending in elections.

[4] Jacob Fabina, “Despite Pandemic Challenges, 2020 Election Had Largest Increase in Voting Between Presidential Elections on Record,” United States Census Bureau. Available at: https://www.census.gov/library/stories/2021/04/record-high-turnout-in-2020-general-election.html (April 29, 2021). Estimates on 2020 turnout can vary according to the source used; however, all reliable sources conclude that the 2020 election had record-setting high turnout.

[10] There may be other reasons to critique Citizens United. This study examines only the relationship between independent spending liberalized by the decision and voter turnout.

That wealthy individuals, corporations and unions, or well-funded associations of people should make large contributions to parties and candidates, and that expenses in political races ...