Issue Analysis No. 7: Do Limits on Corporate and Union Giving to Candidates Lead to “Good” Government? 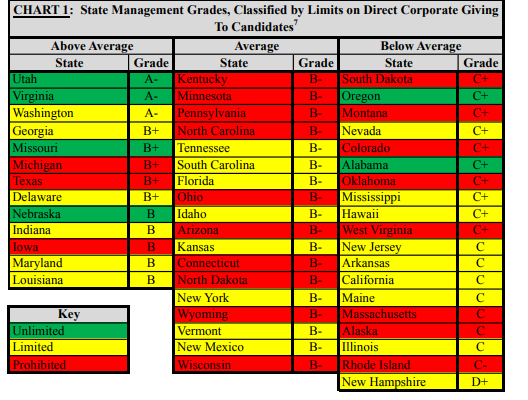 Since the Supreme Court’s 2010 decision in Citi­zens United v. FEC, which freed corporations and labor unions to finance independent expen­ditures in support of federal candidates, the is­sue of corporate and union spending in elections has become a frequent and impassioned topic of political discussion. Most states treat limits on corporate and union giving to candidates differ­ently than those limits imposed on individuals donating to candidates for elected office. His­torically, many states have either placed more restrictive limits, or prohibited altogether, cor­porations and unions from contributing directly to candidates. Proponents of such limits argue that the politi­cal involvement of large corporations and pow­erful unions would overwhelm the ability of in­dividuals to contribute meaningfully, open the door for corruption and “bought” politicians, and lead to an increase in special favors to cam­paign contributors.

In order to determine whether these claims have merit, we examine the relationship between states with varying restrictions on direct corpo­rate and union contributions to candidates and the non-partisan Pew Center on the States’ study of the best-governed states. This analysis looks at these two variables, and provides a separate analysis for corporate and union contributions because many states have different statutes re­garding limitations on one entity or the other.

You can read Issue Analysis 7 here.