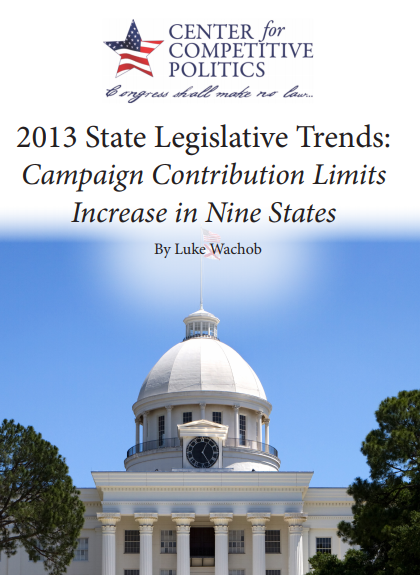 Since the Supreme Court’s 2010 Citizens United ruling that allowed trade associations, corporations, and labor unions to spend independently of candidates without limit and the D.C. Circuit Court of Appeals ruling in SpeechNow.org v. FEC that created Super PACs, 13 states, or over one-third of the 38 states that impose contribution limits on individuals, have increased or repealed contribution limits in some manner. (Twelve states do not limit candidate contributions by individuals). Also in 2013, two more states – Montana and Tennessee – were a gubernatorial veto and two votes short of House passage to a favorable Senate, respectively, of raising their limits. Following this trend, in the first month of 2014, Vermont increased its contribution limits, and Oklahoma appears poised to act too.

While there are many strong First Amendment and pro-competitiveness reasons for increasing or eliminating contribution limits, lawmakers appear to be most concerned with giving candidates and political parties a stronger voice in election campaigns by allowing candidates and parties to raise more funds.

A Survey of Campaign Finance and Lobbying Laws in the 50 States, District of Columbia, New York City, and Seattle

The Institute for Free Speech (“IFS”) has reviewed the laws in all 50 states, the District of Columbia, New York City, and Seattle regulating ...

In Defense of “Super PAC’s” and of the First Amendment