Outsourcing Politics: The Hostile Takeovers of Our Hollowed out Political Parties 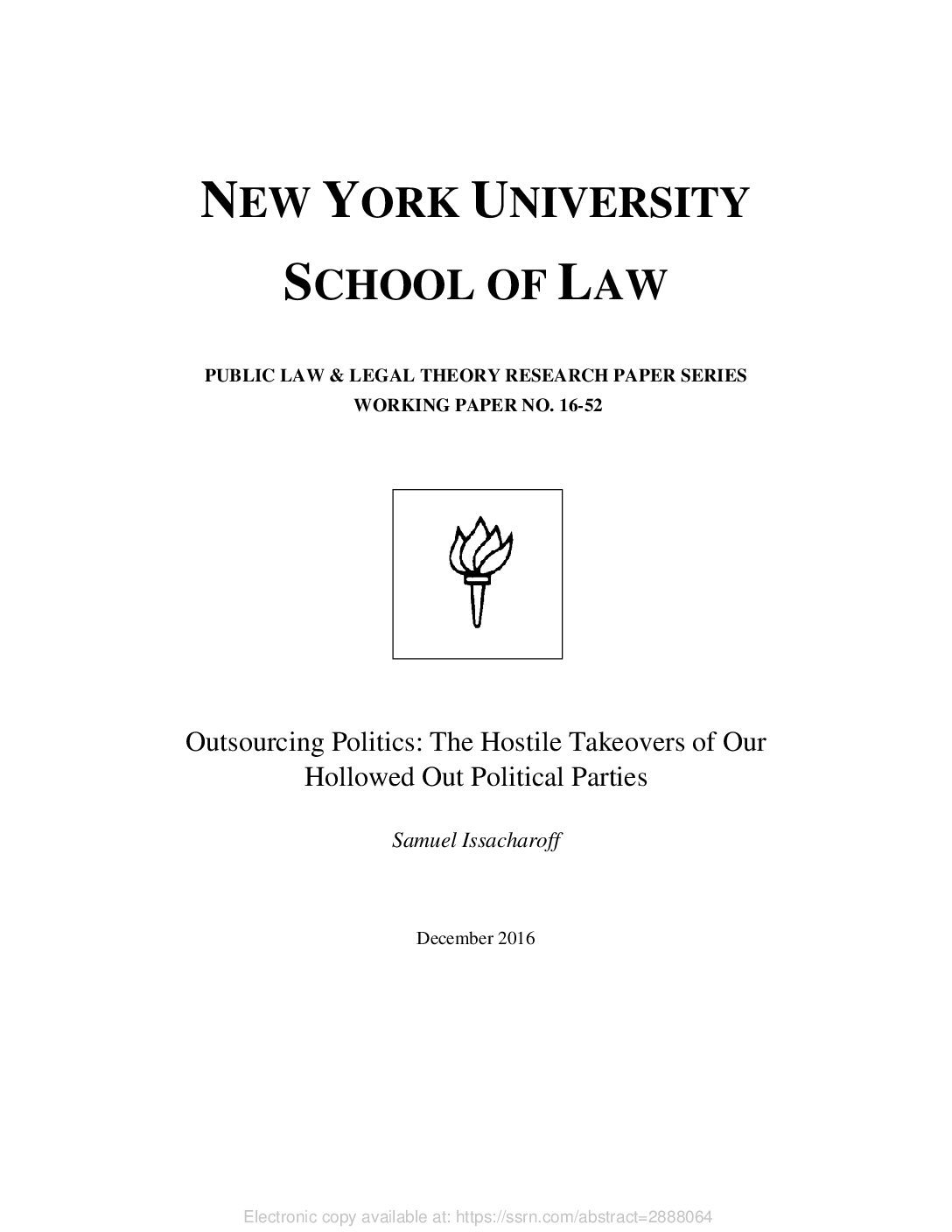 In this article by New York University School of Law Professor Samuel Issacharoff, the author examines the effect of multiple factors, including strict campaign finance regulations, on the health of our nation’s political parties. As Issacharoff explains, in 2016, both the Republicans and Democrats experienced efforts at hostile takeover of their presidential campaigns. On the Republican side of the ledger, the takeover was successful and ultimately yielded the presidency of Donald Trump. The Democratic effort, by a candidate who never actually joined the party, was beaten back only after a long and bruising primary campaign.

Issacharoff examines some of the sources of weakness of contemporary political parties that leave them less able to control their internal party selection processes, and that further hamper their ability to govern effectively. The key insight is taken from a view of the political party as a firm, following the pioneering work of Ronald Coase, and then to merge that onto the modern understanding of political parties as a precarious balance of the desires of the electoral faithful, the interests of the party apparatus, and the governance needs of the party’s elected officials. In effect, this paper joins the economic insights of Coase to the political analysis of V.O. Key.

Historically, American political parties managed divergent interests by control over three critical political functions: access to campaign funding, delivery of patronage governmental positions, and control over the nomination process. Each of these functions has been compromised by legal reforms over the past century. With the inability to internalize control over critical organizational functions, the various constituencies of the modern political party have the choice to “buy not make,” in the language of modern firm economics. Over time, the external option has changed the dynamic of politics, as evident in the last presidential election.

Issacharoff concludes that, in the absence of the coordinating role of the party, politics becomes more atomized, rhetoric hardens, and governance becomes more complicated.

his book does three things. First, it surveys the path of campaign finance regulations since 1971, concluding that the vast majority of provisions - ...

Why the Center Does Not Hold: The Causes of Hyperpolarized Democracy in America

Politics as partisan warfare: that is our world. Over the last generation, American democracy has had one defining attribute: extreme partisan polarization. We have not seen ...