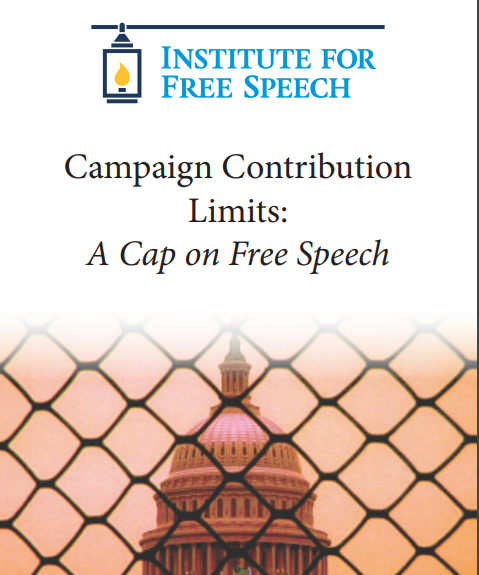 Although the Supreme Court has upheld some forms of contribution limits, such laws diminish the First Amendment’s guarantee that Congress and the States “shall make no law… abridging the freedom of speech….”

The Supreme Court has made clear that the only justification for regulating contributions is to prevent quid pro quo corruption and has struck down limits which are not narrowly tailored to that end.

As this Policy Primer on campaign contribution limits explains, in addition to violating the spirit of the First Amendment, contribution limits give a speech advantage to independent groups over candidates and parties and fail to reduce corruption, improve the quality of governance, or curb the legislative influence of businesses, unions, and wealthy donors. These limits benefit the status quo and hamper new policy ideas, fail to “level the playing field,” and function to restrict the speech of some citizens in order to enhance the speech of others, an idea held by the Supreme Court to be foreign to the First Amendment.

When amending existing contribution limits, policymakers must be careful to ensure that the amended limits: (1) are not so low as to be susceptible to constitutional challenge; (2) apply to all donors and candidates equally; and (3) are indexed to inflation.

Because of the Supreme Court’s decision in McCutcheon v. Federal Election Commission, many of the nineteen states (and D.C.) with aggregate limit, proportional limit, and proportional ban statutes are susceptible to legal challenges and are likely to have their statutes struck down as unconstitutional, if challenged. As a result, many states have already announced that they will no longer enforce their aggregate limit provisions.

Ultimately, campaign contribution limits restrict the ability of citizens to associate with one another and with candidates to speak. Limits on contributions therefore increase the difficulty of citizens to organize and speak out in American politics while trampling vital First Amendment rights.

Advocates of campaign finance regulation often claim that contributions to political candidates must be limited to guard against corruption. They argue that, as contribution limits increase, so too ...