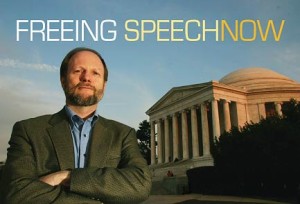 If one person can speak about a candidate without limit, can Congress ban two, three, or hundreds of people from joining together to do the same? That was the simple question presented in the case SpeechNow.org v. Federal Election Commission. Fortunately, a unanimous 2010 D.C. Circuit Court of Appeals decision said no, such a limit would violate the First Amendment. Americans can now form independent expenditure groups to raise and spend money on campaign speech without limits.

SpeechNow extended First Amendment rights already protected for individuals to groups of people who pool their resources to speak. The case legalized what is now known as the super PAC, leading to an increase in speech about candidates and elections. SpeechNow is a pillar of modern free speech rights, and attempts to overturn the decision constitute a major threat to First Amendment political freedoms. This Issue Brief discusses three key facts about the D.C. Circuit Court of Appeals decision in SpeechNow.org v. FEC.

I. SpeechNow extended the speech rights of individuals to groups of like-minded Americans.

SpeechNow fixed an unfair restriction in campaign finance law. Dating back to the Supreme Court’s landmark 1976 decision, Buckley v. Valeo, a wealthy individual already had the ability to spend without limit asking voters to support or oppose specific candidates. In addition, wealthy individuals had numerous opportunities to participate in the political process: for example, they could self-fund campaigns without limit, or purchase and promote their opinions through an array of media outlets, which are exempt from campaign finance laws.

However, if someone shared the same view as another person, rich or poor, they couldn’t pool their funds without limit and speak together. The plaintiffs in SpeechNow – which included David Keating, who later became president of the Institute for Free Speech – wanted to get their message out. But they faced strict legal limits on their ability to speak as a group. Represented jointly by the Institute for Justice and the Institute for Free Speech (then known as the Center for Competitive Politics), the plaintiffs challenged these limits in court. Their lawsuit became one of two landmark cases in 2010 acknowledging the right to unlimited independent speech.

SpeechNow is best known as the case that created super PACs. These entities allow individuals and groups to pool their resources to speak about candidates and government. Super PACs are unique among political committees in that they do not give money to or coordinate their spending with candidates or political parties, but rather fund their own, independent speech. For this reason, they are not subject to contribution limits.

The only constitutional basis for government to impose contribution limits and other restrictions on political speech is to prevent corruption. There’s nothing corrupting about Americans pooling their resources to speak independently. Accordingly, the D.C. Circuit ruled that “the government can have no anti-corruption interest in limiting contributions to independent expenditure-only organizations.”[3]

This conclusion is in line with Buckley, which ruled that government cannot limit how much individuals may spend, acting alone, to independently promote or oppose candidates. The Buckley plaintiffs did not challenge the law’s limit on independent expenditure groups, however, meaning only very wealthy individuals could make use of this freedom. What Buckley made legal for the wealthy, SpeechNow made possible for all Americans.

III. SpeechNow facilitated an increase in speech about candidates and elections.

Since the 2010 decision, there has been an increase in speech about candidates and elections as measured by political spending. Much of this increase has come from super PACs, which have spent over $2 billion since their legalization following SpeechNow.[4] In the 2016 election cycle alone, super PACs spent over $1 billion, showing that the old law significantly limited the right to speak – and the right to hear others.

Though campaign ads are often derided as a nuisance, political spending can have positive effects for democracy. Studies have found that higher campaign spending increases voter participation in state legislative elections,[5] and “that exposure to campaign advertising produces citizens who are more interested in the election, have more to say about the candidates, are more familiar with who is running, and ultimately, are more likely to vote.”[6] These effects suggest that super PAC spending can improve democracy by increasing Americans’ engagement in the political process.

SpeechNow is often overshadowed by Citizens United, but its effects have arguably been more important. Through the creation of super PACs, SpeechNow made it easier for Americans with common beliefs to join together and share information and opinions about candidates. This has led to an increase in speech about elections that produces voters who are more motivated and better informed.

Nevertheless, opponents of the free speech rights affirmed in SpeechNow and Citizens United continue to advocate for overturning these decisions. Proponents of a free and open democracy should reject these proposals. Independent political speech is a vital component of a healthy democracy, and SpeechNow ensures we all have a role to play in it.

[4] See “Outside Spending, by Super PAC,” Center for Responsive Politics. Retrieved on March 20, 2018. Available at: https://www.opensecrets.org/outsidespending/summ.php?chrt=V&type=S (September 28, 2017). The over $2 billion figure was obtained by summing the “total spent by super PACs” statistic from the 2010 through the 2018 cycles.