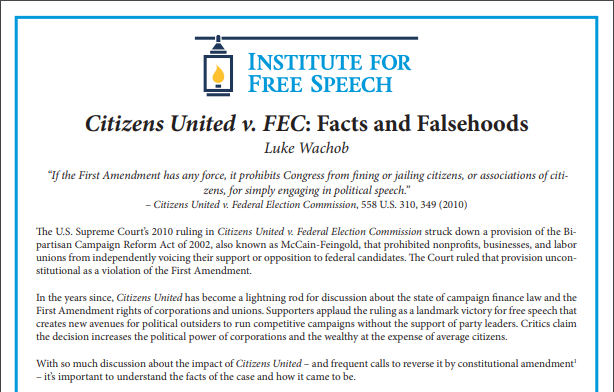 “If the First Amendment has any force, it prohibits Congress from fining or jailing citizens, or associations of citizens, for simply engaging in political speech.”
– Citizens United v. Federal Election Commission, 558 U.S. 310, 349 (2010)

The U.S. Supreme Court’s 2010 ruling in Citizens United v. Federal Election Commission struck down a provision of the Bipartisan Campaign Reform Act of 2002, also known as McCain-Feingold, that prohibited nonprofits, businesses, and labor unions from independently voicing their support or opposition to federal candidates. The Court ruled that provision unconstitutional as a violation of the First Amendment.

In the years since, Citizens United has become a lightning rod for discussion about the state of campaign finance law and the First Amendment rights of corporations and unions. Supporters applaud the ruling as a landmark victory for free speech that creates new avenues for political outsiders to run competitive campaigns without the support of party leaders. Critics claim the decision increases the political power of corporations and the wealthy at the expense of average citizens.

With so much discussion about the impact of Citizens United – and frequent calls to reverse it by constitutional amendment[1] – it’s important to understand the facts of the case and how it came to be. This Issue Brief discusses three key facts about the Supreme Court’s decision in Citizens United v. FEC.

I. Citizens United produced a documentary criticizing Hillary Clinton during her candidacy for the Democratic nomination for President in 2008 and planned to air it over video-on-demand. The Federal Election Commission said no.

Citizens United is a small, conservative nonprofit corporation. In 2008, it produced the documentary film “Hillary: The Movie,” which sharply criticized then-Senator Hillary Clinton, a candidate for the Democratic nomination for President at that time. Citizens United planned to distribute its film via video-on-demand, DVDs, and in movie theaters. Four years earlier, liberal filmmaker Michael Moore executed a very similar plan with “Fahrenheit 9/11,” a documentary released during the 2004 election year criticizing then-President George W. Bush that Moore intended to function as an organizing tool for Bush’s opponents.

Unlike Moore’s company, Dog Eat Dog Films, Citizens United ran into problems with campaign finance laws that prohibited corporations and unions from funding speech supporting or opposing a candidate near an election. Threatened with legal action by the Federal Election Commission (FEC) if it aired the movie or advertisements for the movie – simply because it criticized a politician close to an election – Citizens United decided to sue to vindicate its First Amendment right to show the film.

II. During oral argument, the government told the Supreme Court that it not only had the power to ban “Hillary: The Movie,” but also the authority to prohibit the publication of books that support or oppose candidates near an election.

The Supreme Court initially explored narrow grounds on which to decide the case, such as by ruling that Citizens United’s criticism of Senator Clinton did not equate to advocating against her in the election, or that video-on-demand was not covered by the statute. At oral argument, however, the government took such an extreme position that the Court decided to address the constitutional question of whether Citizens United could be prevented from distributing “Hillary: The Movie” simply because it was a corporation.

The turning point came when the Justices asked then-Deputy Solicitor General Malcom Stewart, the lawyer arguing the government’s case, if the government also believed it could prohibit corporations from publishing books that advocate for or against candidates – even if the advocacy was limited to a single line in a 500-page book. Stewart’s response: “Well, if it says vote for X, it would be express advocacy and it would be covered by the pre-existing Federal Election Campaign Act provision.”[2] In other words: yes, the government argued it had the power to ban such books.

Taken aback by the government’s position, the Court scheduled a reargument of the case to further explore the issue. Once again, the government refused to disavow its power to ban books under the law. The Court’s majority then did the only reasonable thing it could do: it struck down the law as unconstitutional and ruled in favor of Citizens United.

III. The Supreme Court’s ruling in Citizens United allowed nonprofits, businesses, and labor unions to independently voice their support or opposition to candidates, but did not remove the prohibition on corporate or union contributions to candidates’ campaign committees, and did not affect campaign finance disclosure laws in any way.

The Citizens United ruling sparked an immediate uproar among groups and activists opposed to corporations having a voice in politics. In the media, the decision was commonly misconstrued as having eliminated limits on corporate money in politics. In reality, Citizens United left intact the prohibition on direct contributions to federal candidates by corporations and unions. As a result, they still cannot participate in campaigns to the extent that individuals and political action committees can. And, in roughly half the states, the Citizens United ruling had no effect on state law because no prohibition on corporate and union political speech existed in the first place.[3]

In later years, critics of Citizens United have associated the ruling with super PACs and so-called “dark money.” But super PACs were created through a subsequent 2010 case, SpeechNow.org v. FEC, which may well have succeeded regardless of the Citizens United ruling. And “dark money,” a pejorative term for nonprofit groups that can engage in limited political speech without reporting the names and home addresses of their supporters to the government, concerns campaign finance disclosure laws that were not affected by Citizens United in any way. The Justices actually voted 8-1 in favor of existing disclosure requirements – although this does not mean that other, more extensive disclosure laws would pass constitutional muster in the future. Despite this fact, in the years since the ruling, opponents of Citizens United have pushed for more expansive disclosure laws in an effort to discourage or prevent nonprofits, businesses, and labor unions from exercising their newfound freedom.

In pop culture, Citizens United has become a symbol of corporate speech rights and the ubiquity of “money in politics.” In reality, it was a straightforward case about whether the government can ban movies and books that criticize candidates near elections. Advocates for free speech and limited government must push back against the myths and misconceptions surrounding Citizens United by making sure the facts don’t get lost in the fray.

[3] Sean Parnell, “Citizens United, Citizens’ Lives: A comparison of states with and without prohibitions on corporate independent expenditures,” Institute for Free Speech. Retrieved on October 17, 2017. Available at: https://www.ifs.org/wp-content/uploads/2012/11/Parnell-2010-CU-States.pdf (July 14, 2010).

The product of a 2010 court ruling, “super PACs” have been a boon to citizens wishing to more effectively speak about elections. Legally, they ...