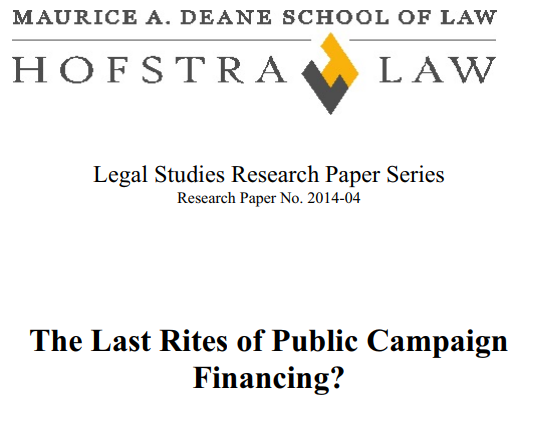 In the wake of the Supreme Court’s 5-4 decision in Arizona Free Enterprise v. Bennett, this Nebraska Law Review article by Hofstra University Law School Professor James J. Sample asserts the current predicament of public campaign financing is such that options that are still on the table under the Court’s First Amendment jurisprudence are, with only rare and idiosyncratic exceptions, fiscal and political non-starters. Conversely, options that would be, and indeed previously had been, fiscally and politically viable, are now, even after years of their routine practice in varied jurisdictions, no longer constitutional. It is, in short, simultaneously a legal and practical dilemma.

Short of highly unlikely swings of the Supreme Court pendulum, and absent an even more unlikely constitutional amendment, cities, states, and federal government actors, who might otherwise consider allowing candidates for office to opt for voluntary public financing, now find themselves between a legal rock and a fiscal hard place – unless a jurisdiction adopts a donation matching scheme via an extraordinarily high initial lump sum funding that grossly overspends the people’s money to the point of fiscal ruin, any candidate opting in is effectively volunteering only to play the role of a sitting duck.

The article ultimately contends that such matching funds systems are particularly vulnerable in jurisdictions with small populations insofar as moneyed interest groups from outside the jurisdiction can easily overwhelm, for example, even the multiplied donations of the citizens of largely rural states or jurisdictions.

o there you have it. Clean election laws (which provide full public funding to candidates who agree to forego private contributions altogether and abide by ...