The Non-Expert Agency: Using The SEC To Regulate Partisan Politics 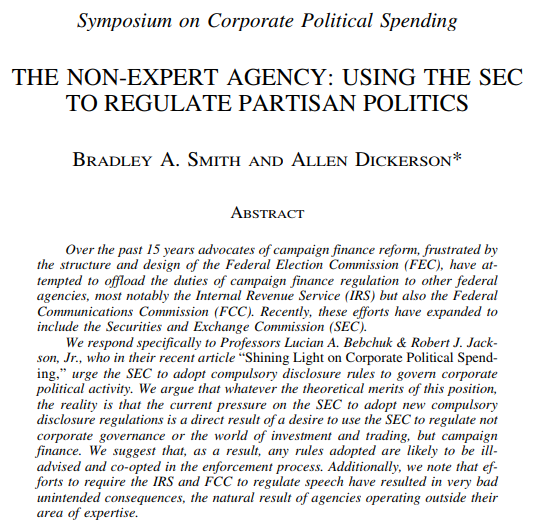 Over the past 15 years, advocates of campaign finance reform, frustrated by the structure and design of the Federal Election Commission (FEC), have attempted to offload the duties of campaign finance regulation to other federal agencies, most notably the Internal Revenue Service (IRS) but also the Federal Communications Commission (FCC). Recently, these efforts have expanded to include the Securities and Exchange Commission (SEC).

In this Harvard Business Law Review article, Center for Competitive Politics Chairman and Founder Bradley A. Smith and Legal Director Allen Dickerson, respond specifically to Professors Lucian A. Bebchuk and Robert J. Jackson, Jr., who in their recent article “Shining Light on Corporate Political Spending,” urge the SEC to adopt compulsory disclosure rules to govern corporate political activity. Smith and Dickerson argue that whatever the theoretical merits of this position, the reality is that the current pressure on the SEC to adopt new compulsory disclosure regulations is a direct result of a desire to use the SEC to regulate not corporate governance or the world of investment and trading, but campaign finance. The authors suggest that, as a result, any rules adopted are likely to be ill-advised and co-opted in the enforcement process. Additionally, they note that efforts to require the IRS and FCC to regulate speech have resulted in very bad unintended consequences, the natural result of agencies operating outside their area of expertise.

At the core of the theory of the independent agency is a belief that administrative bodies will develop unique technical competence and will operate within that sphere of expertise. Pressure on the SEC (or other agencies) to regulate campaign finance takes these agencies out of their area of professional expertise and competence, and is thus likely to result in bad law, damage to institutional reputation, and a distraction from the agency’s core mission.