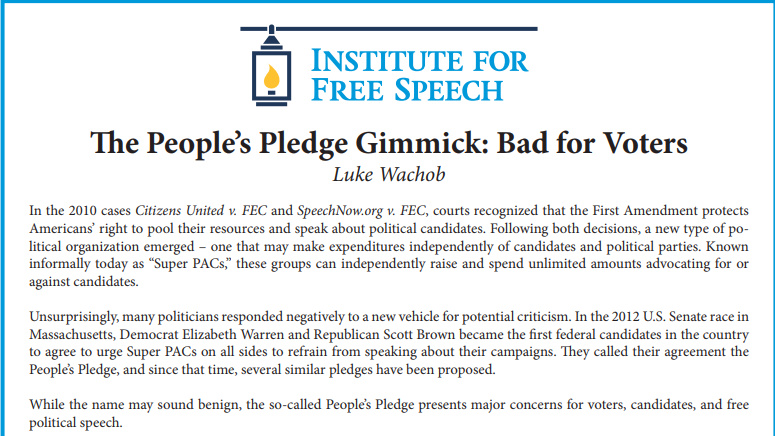 In the 2010 cases Citizens United v. FEC and SpeechNow.org v. FEC, courts recognized that the First Amendment protects Americans’ right to pool their resources and speak about political candidates. Following both decisions, a new type of political organization emerged – one that may make expenditures independently of candidates and political parties. Known informally today as “Super PACs,” these groups can independently raise and spend unlimited amounts advocating for or against candidates.

Unsurprisingly, many politicians responded negatively to a new vehicle for potential criticism. In the 2012 U.S. Senate race in Massachusetts, Democrat Elizabeth Warren and Republican Scott Brown became the first federal candidates in the country to agree to urge Super PACs on all sides to refrain from speaking about their campaigns. They called their agreement the People’s Pledge, and since that time, several similar pledges have been proposed.

While the name may sound benign, the so-called People’s Pledge presents major concerns for voters, candidates, and free political speech. This Issue Brief identifies three primary problems with gimmicks like the People’s Pledge.

I. The People’s Pledge seeks to monopolize speech by candidates by muzzling other speakers.

Academic research indicates that voter knowledge and interest in elections increases as a result of exposure to political advertising.[1] And while candidates’ voices are undoubtedly of tremendous importance, they are not the only ones who should be able to speak. Voters benefit from access to speech about candidates from independent groups as well. Rather than supporting the people’s interest in obtaining as much information as possible about candidates, however, the People’s Pledge undermines this goal by attempting to silence independent speakers. Candidates who agree to the People’s Pledge do so to secure a monopoly over speech about their candidacies, leaving voters with less information about those candidates and less ability to challenge the veracity of their statements.

II. The People’s Pledge is vulnerable to gamesmanship that harms both candidates and voters.

Typically, candidates who agree to the People’s Pledge agree to pay a financial penalty every time an independent group creates an ad that appears to support their campaign or harm their opponent. This structure is highly vulnerable to gamesmanship because it allows savvy political players to pose as “supporters” of a candidate they actually oppose in order to deprive that candidate of financial resources.

These tactics have been used before in the context of state-level tax-financed campaign programs that allowed candidates to receive additional funding when an opponent benefited from independent expenditures. For example, in one instance during a 2008 campaign in Arizona, an LGBT rights organization sent out a blast e-mail in “support” of a socially conservative candidate, with the intention of angering socially conservative supporters of that candidate.[2] Not only was the candidate’s campaign harmed by this message, but their opponent received extra funding as a result.[3]

The People’s Pledge presents a similar problem: groups can drain a candidate’s resources by pretending to support them with ads that tout a candidate’s unpopular stands or characteristics either to a general or targeted audience. These ads deceive voters and leave candidates with no viable course of action. They must either pay the penalty, attempt to renegotiate the pledge, or suffer negative publicity for “breaking” the pact. If they pay the penalty, candidates are left with less to spend promoting their message to voters.

III. The People’s Pledge is rarely agreed to by both candidates and often amounts to a cheap political stunt.

Despite dozens of subsequent proposals from candidates in other races, the Brown-Warren Senate race remains the only congressional contest where both candidates in a general election agreed to the People’s Pledge.[4] The only other agreed-upon pledges occurred in primaries or state-level races. Why are such pledges so rarely agreed to? It may be because they typically do not impact candidates equally. For example, candidates who are likely to win an election may offer a pledge because they know their longshot opponents need support from independent groups to have a chance. Others may propose a pledge because they have more funding than their opponents and want to help ensure they maintain their financial advantage.

In these cases, the pledge is motivated by politics rather than principle. One campaign manager explained his candidate’s refusal to sign the pledge by remarking that it was “more than a year and over $2 million too late.”[5] Other candidates have refused to sign pledges that were announced in public debates or on social media, delivered to the campaign’s headquarters without notice, or offered only in the final months of a campaign. Each of these scenarios outs the pledge for what it is: a cheap political gimmick.

The People’s Pledge is a benign-sounding agreement that may initially appeal to candidates who desire greater control over their campaign’s messaging. However, pledges are rarely agreed to and are often regarded as a political stunt. Ultimately, these schemes deny voters access to valuable independent speech about candidates, frequently benefit one candidate while harming another, and incentivize dishonest political advertising that confuses voters and drains candidates of important resources.

[4] We derived this data based on the information compiled at the website http://www.peoplespledge2014.org/, a project of Common Cause and Public Citizen, which tracks and promotes the People’s Pledge, as well as our own research through LexisNexis archives.

The freedom to associate with others and speak as a group is foundational to democracy. Individuals rarely can change their society, government, or laws ...

The U.S. Supreme Court’s 2010 ruling in Citizens United v. Federal Election Commission struck down a provision of the Bipartisan Campaign Reform Act of ...