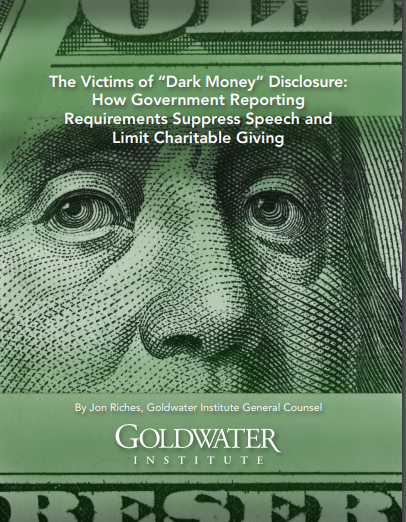 In this Goldwater Institute Policy Report, author Jon Riches highlights the coordinated attack on private political speech under the banner of “dark money” and its dangerous effect on nonprofit organizations. As the report explains, anonymous political speech has been essential to democratic discourse since the founding of our republic. Indeed, ratification of the U.S. Constitution was primarily debated through a series of anonymous papers

Yet in recent years, anonymous political speech has been under attack by critics of so-called “dark money,” a pejorative term used to describe private giving to nonprofit groups – typically 501(c)(4) social welfare organizations, 501(c)(5) labor unions, and 501(c)(6) trade associations – that occasionally engage in political spending, but are not required to report the names and addresses of their individual donors to the government, unless donations are earmarked to fund specific ads. These critics are increasingly demanding that government expose the private information – the names, home addresses, occupations, and employers – of supporters of these nonprofit groups.

Couched as “transparency” measures, “dark money” disclosure mandates are often used as excuses to silence disfavored speech. Troublingly, disclosure mandates are sweeping the country in the form of vague and overbroad regulations reaching the activities of 501(c)(3) nonprofit organizations – groups that operate in nearly every sector and industry in the United States and represent views across the political and philosophical spectrum. These mandates have diluted political dialogue, invited harassment and retaliation against speakers, and chilled speech and association. Although the Constitution protects political and private associations against compelled disclosure, federal courts have often failed to enforce those protections.

Therefore, as the report concludes, liberty advocates should litigate for greater constitutional protection of free speech and association rights. At the same time, the report highlights several simple policy reforms that can protect nonprofits from these coordinated efforts to silence opposition and endanger free thought, speech, and association.

This study examines the impact of one of the most common features of campaign finance regulations: mandatory disclosure of contributions and contributors’ personal information. While scholars have looked at the effects of ...

As political campaigns have become more expensive1 and sophisticated,2 Congress has increasingly regulated them,3 yet the Supreme Court has declared many aspects of that regulation unconstitutional.4 Recently, ...