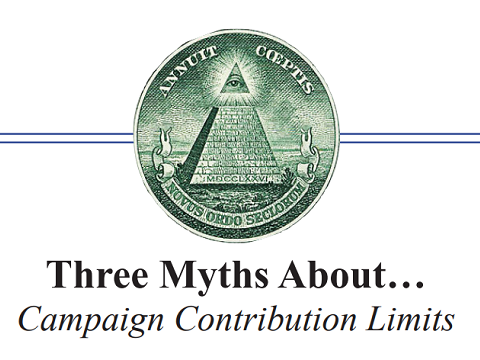 Forty-five of the 50 states and the federal government in some way impose limits on the amount individuals or groups can contribute to the campaigns of their preferred candidates. Here’s the reality behind three common myths often asserted
about contribution limits:

FALSE. After comparing U.S. News & World Report’s ranking of all 50 states on the quality of their governance with each state’s contribution limits on individual giving to legislative candidates, we found the opposite. Five out of the top-10 ranked states allow unlimited contributions from individuals to statewide and state legislative candidates (Indiana, Virginia, Utah, North Dakota, and Iowa).2

THE VERDICT: While also failing to achieve their intended goals, ultimately contribution limits restrict the freedom of citizens to contribute to the candidates and causes of their choice. More information on how to access the research described above is available on the back of this brief.

Unenforceable: States Respond to McCutcheon and Support the First Amendment

On April 2, 2014, the Supreme Court issued its decision in McCutcheon v. Federal Election Commission, which invalidated the federal aggregate limit on contributions ...